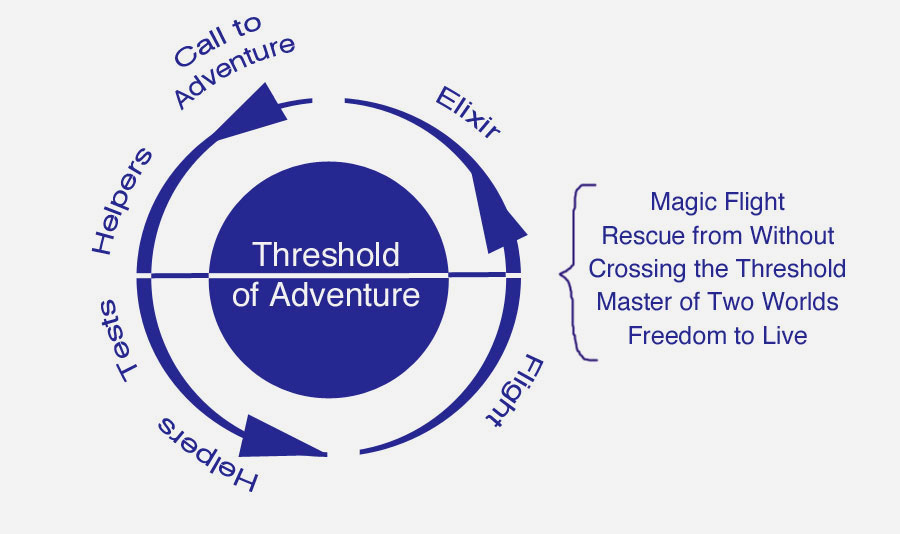 So far we have seen that a person embarking on a shamanic journey follows the path of Joseph Campbell’s Hero’s Journey. In this last stage, the parallels remain. You may have noticed that we moved from a basic shamanic journey in Part 1 of this series on The Shamanic Journey & Hero’s Journey where any traveler or adventurer begins with the call, finding assistance from guides, and experiencing the road of trials, to a shamanic journey undertaken by an initiate in Part 2 of this series who is on a healing journey to recover a soul part. The boon discussed in Part 2 was the gift brought back by the soul part and even the soul part itself. We explored the types of gifts in the context of the accomplishments of the hero. The soul part obtained by the journeyer may be their own or may be that of a client they are working for. Here in Part 3, the soul part, the gift, and the healing must be brought back into ordinary reality. The trip back is not always easy and there are a number of avenues for return.

As Joseph Campbell describes, not all heroes come by their reward honestly. Many, as in Jack and the Beanstalk and Jason and the Golden Fleece, steal their prize from the Gods and have the challenge of getting out alive without getting caught. The famous anthropologist Mircea Eliade describes a number of stories from traditional shamanic cultures where the journeyer has to steal-back lost soul parts from the land of the dead. Needless to say, the dead relatives of the soul part’s owner were remorse to let the soul parts go. If the journeyer was unable to slip in and out unannounced with the soul part a battle would ensue and oftentimes a long pursuit. Here is a more light-hearted account of a magical flight as retold in The Hero With A Thousand Faces. It starts when the hero Gwion Bach accidentally comes to own three drops of the elixir of inspiration that the Goddess Caridwen had concocted. Gwion decides to take off with the boon:

“And she went forth after him, running. And he saw her, and changed himself into a hare and fled. But she changed herself into a greyhound and turned him. And he ran towards a river, and became a fish. And she in the form of an otter chased him under the water, until he was fain to turn himself into a bird of the air. She, as a hawk, followed him and gave him no rest in the sky…” (page 172).

These days, I rarely, if ever, encounter a situation where I have to steal a soul part back although I see the framework for this type of soul retrieval. It is an outside-in perspective that reflects the worldview of the person doing and/or receiving the healing. People who are not in a spiritual or self-reflective process experience wounding and soul loss as something brought on them from the outside, be it from a malicious person or evil spirit. I work with my clients from an inside-out perspective. From this vantage, we see the inner work they are doing as a way to free the soul parts. The soul parts are more bound up by old stories and beliefs than anything, and when the client begins to even question these stories the soul part is freed and able, with some help, to come back. During the journey I work to dispel any pursuing influences and shift the energy around the soul part to release anything that may prevent the soul part’s return. This makes my return across the threshold as the journeyer a magic flight without pursuit. The return seems effortless without all the trials we encountered on the way to non-ordinary reality.

Sometimes the journeyer gets stuck after finding the boon and cannot either figure out the way back or the method of returning. This is a point where everything can shift and the spirit guides that were there are now gone. The journeyer may completely forget how they got to where they are, let alone decipher what the return route might look like. This is the time to call out and see who is going to come and help with the return trip. The spirit animal or guide that arrives to help the journeyer out of the pickle may be the same guide that offered support through the road of trials at the start or may be a new, unfamiliar guide that will help with the next phase of the person’s life.

When Joseph Campbell speaks of the rescue from without he tells stories of how the ordinary world comes to get the hero. This may be someone in human form on earth waking up the Sleeping Beauty or Rip Van Winkle. For the shamanic journeyer the simplest form of rescue from without is the call-back beat of the drum. During the journey the journeyer has listened to a repetitive, monotonous drumming meant to place them in an altered state of consciousness. Then the drumming pauses and takes on an entirely different, chaotic rhythm. This wakes up the ego-mind that says, “oh yes! Let’s go home now! I’m not sure how much time has passed but it may have been to much.” In this way, both the drum and our ordinary world selves rescue us from without.

Crossing the threshold and coming from the mystical into the mundane can be an incredibly strenuous process. In the healing world, we like to call this “integration”. This is the time when the boon, healing, gifts, and talents must be brought from the ethereal forms of the cosmos to the dense form of our earth-based bodies. Joseph Campbell describes this crisis so eloquently I can’t help but read these passages over and over again:

“This brings us to the final crisis of the round, to which the whole miraculous excursion has been but a prelude – that, namely, of the paradoxical, supremely difficult threshold-crossing of the hero’s return from the mystic realm into the land of common day. Whether rescued from without, driven from within, or gently carried along by the guiding divinities, he has yet to re-enter with his boon the long-forgotten atmosphere where men who are fractions imagine themselves to be complete. He has yet to confront society with his ego-shattering, life-redeeming elixir, and take the return blow of reasonable queries, hard resentment, and good people at a loss to comprehend” (page 186).

“How teach again, however, what has been taught correctly and incorrectly learned a thousand times, throughout the millennia of mankind’s prudent folly? That is the hero’s ultimate difficult task. How render back into light-world language the speech-defying pronouncements of the dark? How represent on a two-dimensional surface a three-dimensional form, or in a three-dimensional image a multi-dimensional meaning? How translate into terms of ‘yes’ and ‘no’ revelations that shatter into meaninglessness every attempt to define the pairs of opposites? How communicate to people who insist on the exclusive evidence of their senses the message of the all-generating void?” (page 188).

The journeyer/hero is different coming back than they were when they left. They have changed, but the world hasn’t. This can cause a good deal of heartache if the journeyer is not prepared for the isolation that may occur when friends and loved ones cannot understand the enormity of the experience and he no longer feels understood. This is why I always encourage students and clients to be gentle with themselves as they settle into their new selves. The journey is a heartbeat in comparison to the time it may take to integrate what all transpired. Other times it flows like water through a reed. It is never easy to predict how the integration process may transpire, but it is worth having a head’s up that it may be tricky. Allowing some space around yourself after the work is important. Think of how many times you see in movies or read in stories that the hero seems distant after coming back from such a journey. He may go for long walks in the garden or sit for hours watching the woods. Our souls crave the isolation that frightens our egos. Allowing the intelligence of the soul to dictate the process is the best bet.

The master of two worlds is the fully integrated hero that is able to share his magical gift with the world. The integrated journeyer is no different. In fact it is often said the the shaman is the one who walks with a foot in both worlds. If the gift coming back is about the ability to express one’s passion openly, the journeyer will take the opportunity to share what he loves with others. This is the point where the hero feels compelled to make this world that stayed the same, better. The theme of service comes in to play here and the hero’s relationship to service will deepen considerably. Joseph Campbell shares that Buddha hesitated to return from nirvana once he attained it, but it was his compassion for all living beings that brought him back to the divine play or the lila as it’s called in Hinduism. Ram Dass discusses this choice extensively when teaching about siddhas in his book Be Love Now. Although we probably haven’t entered enlightenment or sainthood, we too are called to move out of the reverie that comes from receiving the gifts of the Gods and enter back into the suffering of the ordinary world. It gives the amazing light that is the gift and our opportunity to glimpse the infinite, purpose.

The fantastic news is that with the transformation that comes through this process also comes freedom from attachment. This allows the hero the chance to live life more fully with less suffering and more love. In meeting the heavens, the hero now has access to more grace than he can imagine. With this grace comes an outstanding capacity to sit in awe of the world. I’ve seen this on the faces of those who undertake life-changing shamanic journeys. They glow. There is an experience beyond words that they well over with. Easing another’s suffering becomes effortless when one rests in such bliss. This is not to say that life will always be easy or painless after the full round of the hero’s journey takes place or that another round isn’t already underway, but this is to say that moments of awe will overtake days, months, and years of trial.

Joseph Campbell cautions us here that “Man in the world of action loses his centering in the principle of eternity if he is anxious for the outcome of his deeds, but resting them and their fruits on the knees of the Living God he is released by them, as by a sacrifice, from the bondages of the sea of death. ‘Do without attachment the work you have to do… Surrendering all action to me.”

Simply put the hero turns himself over, is liberated and states, “Let Thy will be my will.”

Sign up for Stacey’s newsletter and get “What is My Spirit Animal?”

Sign up for Stacey’s newsletter and get her free comprehensive guide with instructions on how to find your spirit animal.