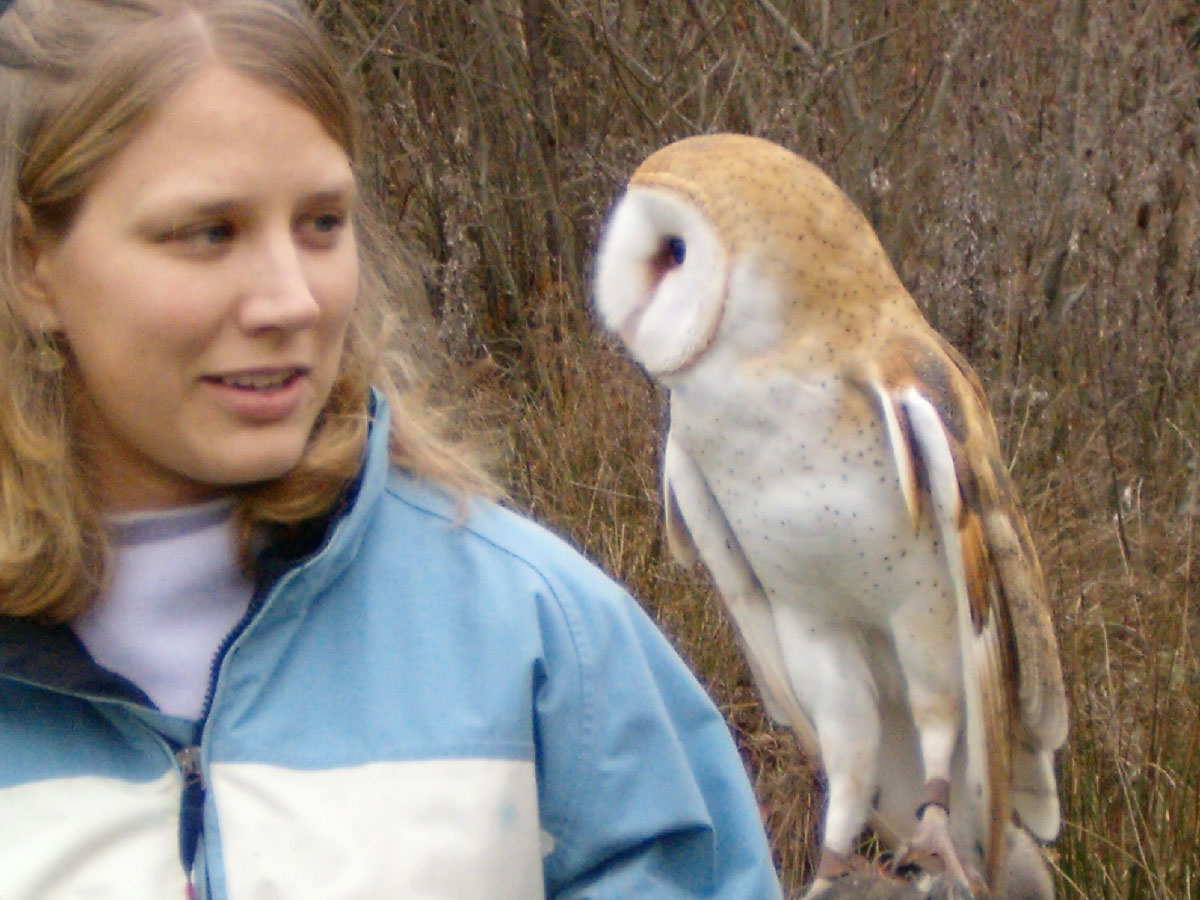 In this section of Gracious Wild: A Shamanic Journey with Hawks, I share the story of meeting and caring for a potential candidate for the raptor education program I was volunteering in. The program took in and rehabilitated injured raptors. If the birds were handicapped for life, and we had space available, we trained them to work with humans so they could be “ambassador birds” that traveled to schools and clubs to raise awareness about the value of these incredible birds of prey. This is the story of how a barn owl ambassador bird helped with this red tailed hawk rehabilitation.

On my walk into the wildlife center one morning, the director [of the wildlife rehabilitation center], met me on his front porch. In his arms he held a box with a juvenile red-tail standing inside. My heart skipped and I confessed to myself that it was hard not to let the thought of “education bird” slip into my mind. Ian asked me to take the bird down to the clinic, but my arms were full with the carrier of the northern flicker (a woodpecker) chick I was raising. I continued down to the clinic and began my rounds for the day. Soon thereafter, I was standing with Ian in the treatment room as he pulled the gorgeous beast out of the cardboard box. The hawk looked at us through her clear, bright eyes, calmly accepting our restraint. We held her on the table merely as a formality, as she didn’t resist our hands for even a moment. Sometimes an animal’s sheer volume of pain, hunger, and thirst sends them into an eerie shock. This hawk was obviously separated from the experience in some way—she didn’t fight for her life, but the stare in her eyes told of an abysmal strength and knowing. Her stare held a powerful life force like that of a courageous warrior entering into the battle of his fateful undoing.

Inspection of the hawk’s injuries pointed to electrocution. She was missing five or so flight feathers from her left wingtip. A fairly large, crusty wound was where feathers once were. She likely flew into a power line with her left wing and the electricity arched out of her left foot, which was now badly swollen. Ian predicted that there would be a die-off of tissue, but also a good chance that the hawk would recover from her injuries and be able to live comfortably in captivity. We moved her into a small wooden cage in the ICU and left her with some food. Ian was leaving on vacation in a few hours, so I took instructions on when and how to start hand-feeding the hawk. Already, I was struggling with the aching feeling in my heart, and how badly I wanted to love this courageous bird. I felt powerless to hold back the love that was streaming from my being. I wished I could remain detached. I wished I could let myself flow through my heart.

When I returned to the wildlife center to care for the red-tail that evening I found her sitting quietly in her cage with two mice at her feet. My heart sank. If she wouldn’t eat, the prognosis was dreadful. I realized she might be too far gone. She could be in the core of a battle, with the only way out being death. I decided to ask my dear friend Papa Rhett [a barn owl in the raptor education program] for help.

I didn’t know what Rhett could or would do, but he was the only one I knew to turn to. I thawed and packed up three mice for the owl and headed outside in the last light of day. As I approached Rhett’s mews I saw his white underside against the wall. He was hanging to the cage by his talons, wings partly outstretched, staring in my direction. I was completely stunned. Rhett rarely anticipated my approach and he had never been so anxious to meet me. When I walked into his mews it became plainly obvious that Rhett was looking for food. In our few months of working together he’d never requested or eaten food from my hands. He would take food occasionally from a couple of his other handlers while they worked with him, but he always refused food from me. I had tried enough times that I’d actually given up on the idea that he’d ever dine on my glove.

This time, he practically leapt onto my glove and leaned towards the pouch of food on my hip while I put on his leash. I resisted his plea for food until we were outside of his mews. He snatched the mouse from my fingers like he hadn’t eaten in days, even though I knew he’d had a meal every day leading up to this one. I watched him snap the mouse’s neck, and surgically sever the head from the body. He threw his head back and gulped down the mouse head. Next he carefully opened the body cavity and delicately removed his favorite organs, one by one.

Raptor’s beaks are commonly viewed as tearing and grabbing utensils. This barn owl used his beak like a scalpel and tweezers. His precision was remarkable. He proceeded to disconnect the torso from the hindquarters of the mouse and finish his meal in those two last bites. I stood captivated, relieved to watch him eat. The experience was truly cathartic. Halfway up to the clinic, we stopped and I fed Rhett a second mouse. He took even more time to consume this mouse. I did my best to remain patient. My friend seemed to have a plan.

Once in the door of the clinic, Rhett took to staring towards the ICU. I did my best to hurry and prepare another mouse for the hungry owl. His gaze, in typical Rhett fashion, was locked. I carried him into the ICU, reached over with my free hand, and lifted the sheet off of the door to the red-tail’s cage. To my amazement, the hawk stood leaned over a mouse of her own, eating to her heart’s content. She did not pause to look up at us. I was comforted to know our presence was not an intrusion. Once she finished her meal she looked up at us and calmly returned to an upright posture. I stood there with the barn owl on my glove staring into the eyes of this lovely bird. Tears welled in my eyes and I thanked both my feathered companions for the healing they had enacted… I had taken the leap of faith and now the magic in my world was in their talons.