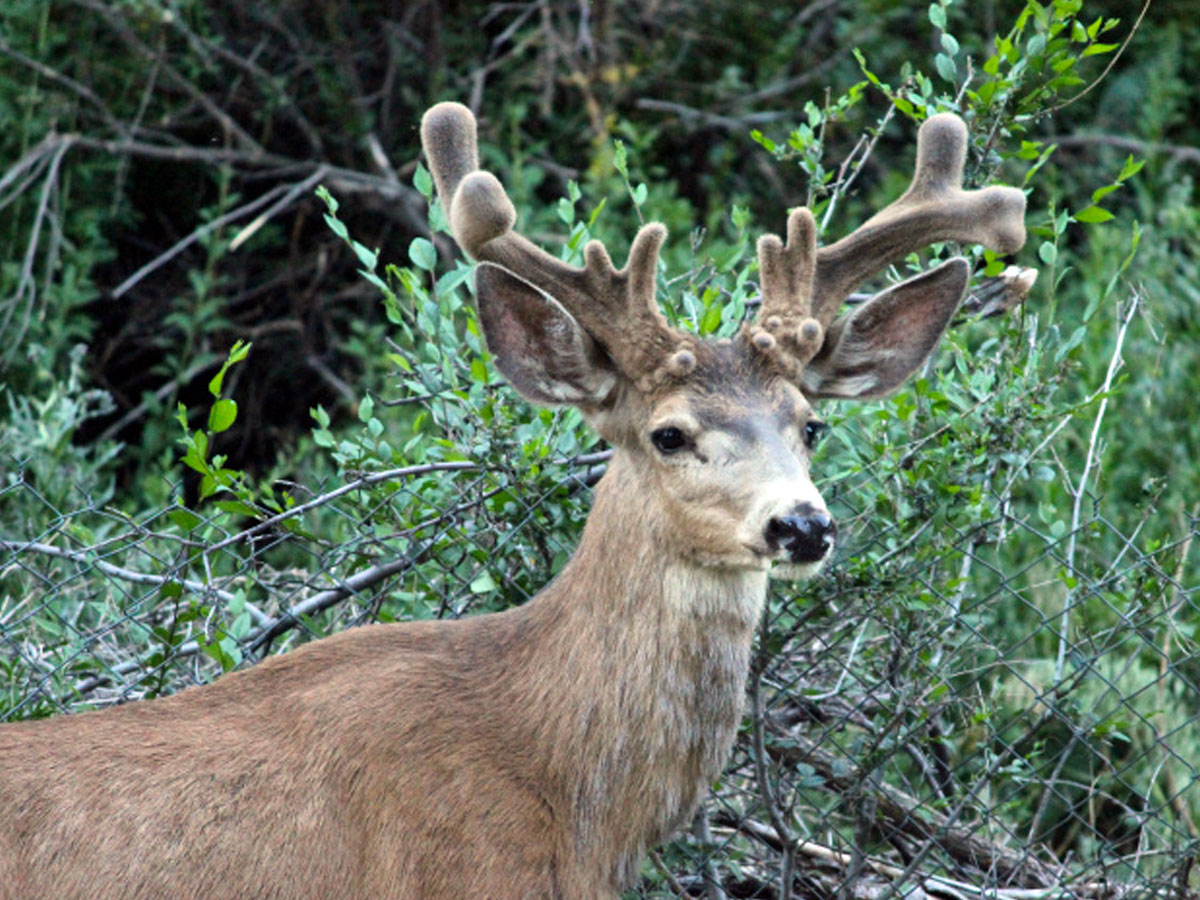 She nibbles grass by gathering at a few blades at a time with her gentle lips and clipping the greens into her immaculate, petite mouth. Nearby, another of her kind, a male with velvet dripping off his headful of antlers tenderly plucks leaves from a service berry bush. She senses her others also around quietly browsing, but the brush and their tawny coats obscures them from view. Everything appears halcyon, at peace, but this belies the sparkling tension in the air. With an unexpected crack from a small twig they know not to be born by one of their own, they all turn and take flight into the woods.

Deer are so commonly known in myth and in everyday life, and still there is a magic about them that startles the ordinary away. Their delicate yet tenacious manner has lead many hunter astray into other worlds and even to their death.

There is the myth of the goddess Artemis, huntress and protector of animals. Artemis was in a pond washing naked and swimming with her similarly unclothed nymphs one day.

A straying hunter came upon them and gawked at the site. In her anger, Artemis turned him to a stag and called his own hunting dogs upon him. He was killed by his own hunting party. Artemis was a virgin goddess and this tale reminds us of the importance of guarding our own innocence. Innocence and purity are at the heart of deer medicine.

White stags appear in legends from around the world, but most notably in the stories of King Arthur. He was never able to catch the white stag, but in his attempts to do so he was lead in to great adventures and mystical places.

By following the deer spirit animal into the woods of the mystery either within ourselves or within spiritual teachings we risk losing track of all time like the children of Narnia caught up in the wardrobe. And too we are invited into forgetting ourselves all together.

There are three aspects to deer worth considering – stag (buck), doe, and fawn. Each has their own particular expression that is unique enough to explore independently.

Bucks are more independent traveling alone or in lose, unrelated bachelor groups. Their antlers symbolize connection to the heavens and intuition received through the mental plane. Their crown of antlers also corresponds to royalty and, thus, power. Bambi’s father was called the Great Prince or King of the Forest for this reason.

A mature buck with a 6-point rack in full rut strikes reverence in the heart of any man. There is a confidence and valor in a buck that rivals even the most fierce of predators. The biggest and strongest bucks in the forest mate with the most does and produce the most off-spring. They do so by fending off other suitors in battle. This is the quintessential Darwinian “survival of the fittest”.

Notice that for most of the year the bucks live peacefully side by side, but there is a season for competition. When in your life are you in competition? Are you able to enter into a test of strength when appropriate and then drop your weapons (antlers) and move on to coexist without strife the majority of the time? We sometimes judge against competitiveness, but there is a striving and refining that happens in these trials that carries us through tough times (winter) and births new energy into the world.

Stags can teach us that by knowing when to compete and when to drop our attachment to the game we can become the kings of our own inner wild nature.

Does stick together in groups related maternally year round. Their presence is of a drastically different measure. To understand the nature of doe energy simply think of the phrase “doe eyes”. Their eyes are big and soft, and any woman with doe eyes is known for luring you in.

There are many myths around the world of women who turn into animals or who are half woman, half beast. In some North American tribes there is a legend of the Deer Woman who is half woman, half doe. Some stories tell of how she lures men to their deaths. This relates back to the story of Artemis and how the gawking hunter lost his life. So, despite the fact that bucks are confident and courageous and does are soft and sweet, the two have a reputation for luring men into potential danger.

The masculine aspect of all of us (the animus) is our active nature, our “doing” way in the world. When we are caught up in the activity of our lives we easily go on auto-pilot. Then we are unknowingly subject to the luring energy of deer spirit animal. Before we know it we’ve wandered into an unknown part of our own inner forest and we think to ourselves, “I don’t know who I am anymore and I’m not sure where I was going.” This is when deer spirit animal magic has been at work in you.

Courtship and mating occurs in late fall, early winter (October-December) and the gestation period is 7 months. We often think of spring as the time for babies, but really fawns are not seen until summer officially arrives. This speaks to running on a later schedule than is expected, possibly even being prone to procrastination. This can also be a tendency to wait until you know what the picture is going to look like before moving forward.

By November, the deer have a good sense of how they will fare through the winter because they have seen the fall harvest and built up their reserves as best as nature will allow. The timing of their breeding depends on rainfall, temperature, and day length. Some species of deer will wait until January to breed.

In thinking about deer power animal, How are you approaching new creative projects right now? Are you holding out as long as you can to see what the environment will be like? Are you able to recognize a good or mild season when you are in one and move forward as to take advantage of the favorable conditions?

There is a doe that sets up residence around our house with her fawn(s) each year. As these things go, she just showed up for the first time this year, today, during the process of this writing. She announced her presence by chasing and charging our dog Diesel. Diesel was jumping and barking at her, and then she was in hot pursuit of him, front hooves lashing out.

We called him off and looked back in time to see a teeny, tiny little spotted fawn jump up and run the other way. The fawn had been laying down just feet from where we had walked. Our dog never saw her until she was on the move. By then he was back with us and stood and watched politely.

In the first three weeks of the fawn’s life, the mother leaves her young bedded down for up to 8 hours at a time while she wanders and grazes. The fawn is not yet able to run quickly enough to evade predators, so the best protection is to lay in hiding and wait until mom comes back with udders full of milk.

A combination of the defensive mother, the camouflage of a dappled coat, the ability to be completely still, and the lack of any scent is what keeps the fawns safe. The mothers clean their fawns immaculately, so no trace of a scent remains. All of these kept our keen nosed and eyed dog from spotting the little one.

Seeing how small this newborn was and thinking of it laying there frozen, waiting for danger to pass reminded me how intensely vulnerable these tender creatures are. We often think of freezing in the face of fear as a weakness, but the combination of the fiercely protective mother and the perfectly still fawn makes an incredibly strong pairing. I mentioned before that purity and innocence is at the heart of the deer totem, this is because as fawns they begin life pure (clean of scent) and innocent (unable to defend themselves or run from danger).

What is your relationship to being vulnerable? Are you ashamed of the tender part of you that lays frozen in the brush? Do you over-emphasize the protective nature of the mother? All of this is necessary for your well being. Keep in mind a balance. Judge not your innocence, love the purity of your soul, and honor your own courageous spirit.