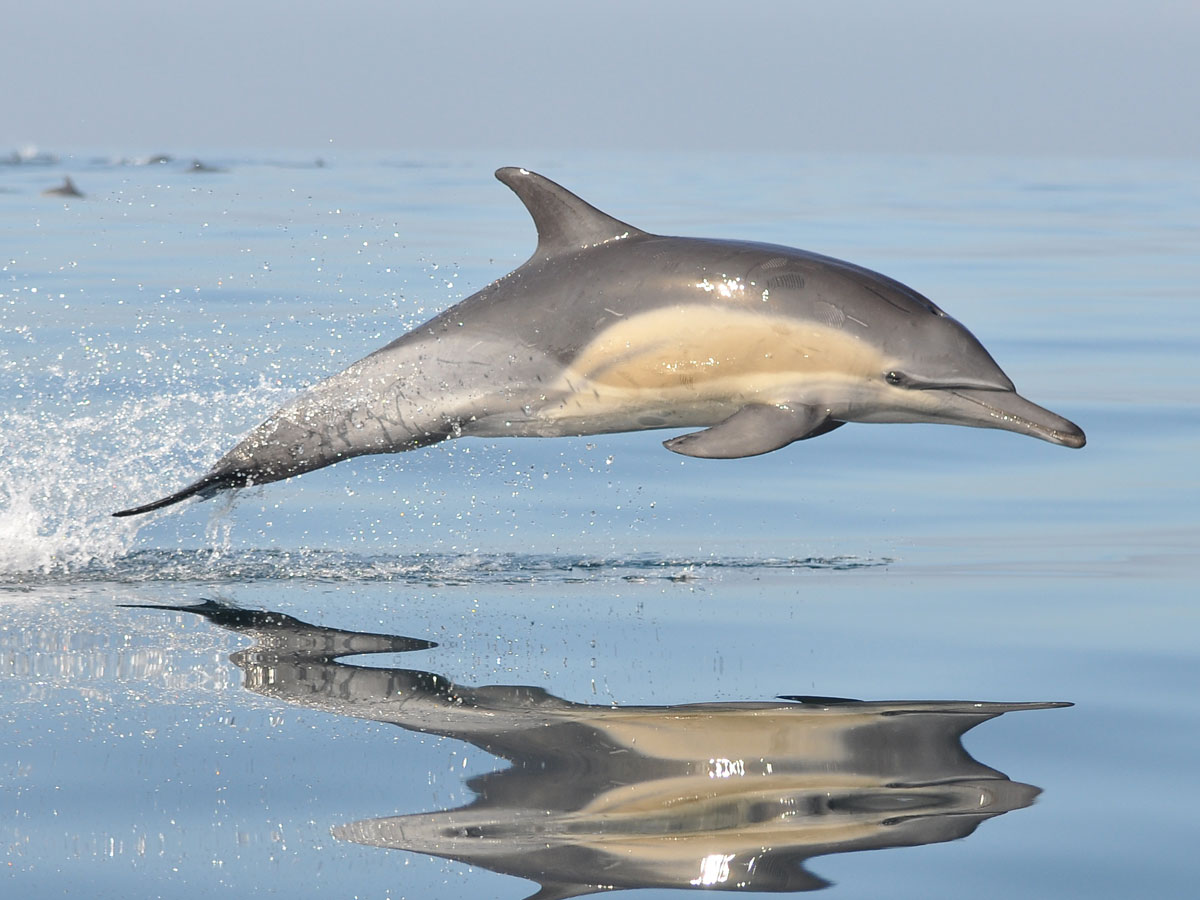 The medicine of dolphin symbolism is often expressed in simple, light-hearted associations of peace, joy, harmony and playfulness. Writers highlight how dolphin spirit animal teaches us to use our breath and work with Mana, or life force. All of these things apply, but dolphin symbolizes so much more.

Of all the animals of the sea, it is likely that dolphin is the most trusted of human companions. ( with the exception of a really good surf board or the best stand up paddle boards, :))

BUT,  dolphin is also the one we’ve regarded with the most paradoxical treatment. Humanity once revered dolphin as a God and now imprisons him in pools for amusement. Viewing the way we treat dolphins gives a window into how we address the light-side of our own nature.

Dolphin Buoys Us Up

In both myth and reality, dolphins throughout time have rescued drowning sailors and guided wayward vessels. From Catholic saints to Greek gods and Chinese explorers to African exporters, every culture has stories of the beneficence of dolphin. Dolphin spirit animal literally lifts us up to the surface in our time of most immediate need. He arises from the depths without notice and grants us a life-saving breath of air.

Whatever goodness in you that is about to die has the opportunity to be saved by dolphin spirit animal.

I’ve often wondered how one animal can have such varied associations in people’s minds – healer, guide, helper, lover, champion, clown, angel, child, playmate, friend, and so forth. What I’ve realized is that dolphin brings exactly what is needed. In one instance a healing is in order and in another a simple snippet of guidance suffices. The life-saving power of dolphin spirit animal is the same throughout, but our our definition of him is based on what we receive.

The buoyant feeling of being lifted up and saved from impending doom is linked to dolphin. The rush of happy endorphins and the giddiness of making it out alive are intricately connected with dolphin symbolism. Think of the times you’ve escaped sudden danger. Remember the laughter that follows. That is what dolphin energy feels like. Dolphin becomes larger than life in our eyes because of the way we feel when we cheat death.

Dolphin spirit animal also lifts up our emotions with his wide grin and high-spirited antics. Whenever you’re feeling down, call on dolphin medicine to help.

Not Favoring Light Over Shadow

Dolphin is an incredibly convivial and happy bloke with a taste for anything that induces laughter and light-heartedness, but we must remember that dolphin plumbs the depths of the Mother’s waters. The ocean, full of gigantic terrors and holding a vast abyss unknown to man, is dolphin’s home.

We tend to favor fun and light over serious and dark, but dolphin is not so blind. He uses keen vision and hearing to navigate his way through enormous expanses of black water. Cutting through the darkness with sharp, piercing clicks, dolphin waits for his noises to bounce off objects and return. This is a form of sensing is called echolocation. It allows dolphin to accurately gauge the distance to the next object as well as the size and movement of the object. It could be his next meal or an approaching shark.

A sophisticated form of listening, echolocation is also used by bats and whales. With dolphin symbolism, we are reminded that we must actively survey our surroundings and listen to our environment to stay safe and make our way in the world. If we get too caught up surfing the waves and performing mid-air acrobatics we’ll lose sight of what lies below.

Dolphin is not afraid of what is under the surface. He can help you develop the same courage. By diving into your subconscious and outwitting your own inner fears and demons, you can save yourself from an uncertain fate.

Countless studies have tried to quantify the intelligence of dolphins. Many scientists agree that dolphins have self-awareness and empathy. Dolphins teach, learn and cooperate. Their neocortex contains spindle neurons that are “involved in social conduct, emotions, judgment, and theory of mind.” [1] Some scientists have seriously considered that dolphins philosophize, or think about thinking. In essence, we’re discovering that the make-up of a dolphin’s brain is strikingly similar to our own.

Researchers know that dolphins give each other names, called “signature whistles”, at birth. Dolphins respond when their names are called and carry their names throughout the whole of their lives.  Eventually the lines between human intelligence and animal intelligence become so blurry that there is no use in trying to say one form of intelligence is greater than the other.Dolphins blur this line. Soon enough we’re simply comparing apples and oranges.

Given this understanding of the great cognitive ability of dolphin, why would we favor the one-sided view of dolphin spirit animal as all innocence and fun? Dolphins live complex lives full of intimidation and fear, grief and loss. They compete and collaborate, antagonize and console. Dolphins have attacked trainers in captivity, lashing out against oppression. Gangs of male dolphins chase and push females into submission. Mother dolphins care for their young with the utmost sincerity.

In the end, light does not exist without darkness. In spite of that, the light always reasserts itself over the dark. Life always overcomes death. Dolphin always carries us back up to the surface.

But who carries dolphin to a life-giving breath when he is in danger? I want you to be mindful when frolicking in the buoyancy and giddiness of dolphin symbolism to not forget the incarnate dolphins on this planet today struggling to survive. There are many threats from humans that face dolphin populations all over the world. As for the populations that aren’t in danger of extinction, individual dolphins are still suffering enormous hardship, suffering and death at our hands.

DOLPHIN SAFE TUNA
In the 1980’s awareness arose about the inadvertent capture and killing of tens of thousands of dolphins in tuna nets. A tuna boycott lead to the creation of a dolphin safe tuna label that is still in existence today. As a result, dolphin deaths in tuna nets have dropped by 99 percent! http://savedolphins.eii.org/campaigns/dsf/

RELEASING CAPTIVE WHALES & DOLPHINS BACK INTO THE WILD
The next wave of consciousness about the mistreatment of dolphins happened in the 1990’s with the fame of Keiko the killer whale (a toothed whale in the dolphin family) who stared in the movie Free Willy. It turns out that Keiko was not free. He was miserable and ill. The International Marine Mammal Project underwent a huge endeavor to reintroduce Keiko to the wild. Keiko was able to fish and roam the open seas on and off for a number of years. Although opinions about his retirement and release vary, the project surrounding his return to the wild raised the question: Can or should we release captive whales and dolphins back into the wild? http://savedolphins.eii.org/campaigns/kwr/

SONAR TESTING
Also rising in the spotlight during this time was mounting evidence linking dolphin and whale deaths to U.S. Navy sonar testing. Proof was eventually found linking mass dolphin and whale beaching events and die-offs to this testing. Efforts are ongoing still today to curb this testing in critical habitats and modify the testing procedures to minimize effects on whale and dolphin populations. http://www.sciencemag.org/news/2015/09/us-navy-limit-sonar-testing-protect-whales

KILLING AND CAPTURING WILD DOLPHINS
In the 2000’s a great outcry arose in response to the film The Cove which documented the mass slaughter of dolphins in Japan for the meat industry. The way that dolphins are still killed for meat and captured for amusement parks in this fishing industry is a brutal reminder of how far humanity still has to go towards the humane treatment of animals. http://www.takepart.com/cove

THE PLIGHT OF DOLPHINS & WHALES IN CAPTIVITY
And the most recent wave of awareness surrounds the question – Should we keep these animals captive at all? Spawned by the documentary Blackfish which portrayed the anger and frustration of the killer whale named Tilikum, this movement is gathering steam. Sea World just announced that they will no longer breed killer whales and will soon retire them from shows, but this says nothing of the smaller dolphins and whales in their care. It also says nothing about the decades left that many of the captive whales and dolphins have left to live. http://savedolphins.eii.org/campaigns/fwd/

We still have a long way to go to lift up the beautiful dolphins that have risen our souls up for centuries. Click on any of the links above to learn more, sign petitions and donate to causes to help make this a safer and better world for dolphins.