"Finding a Nest" from the book Gracious Wild -

“Finding a Nest” from Gracious Wild 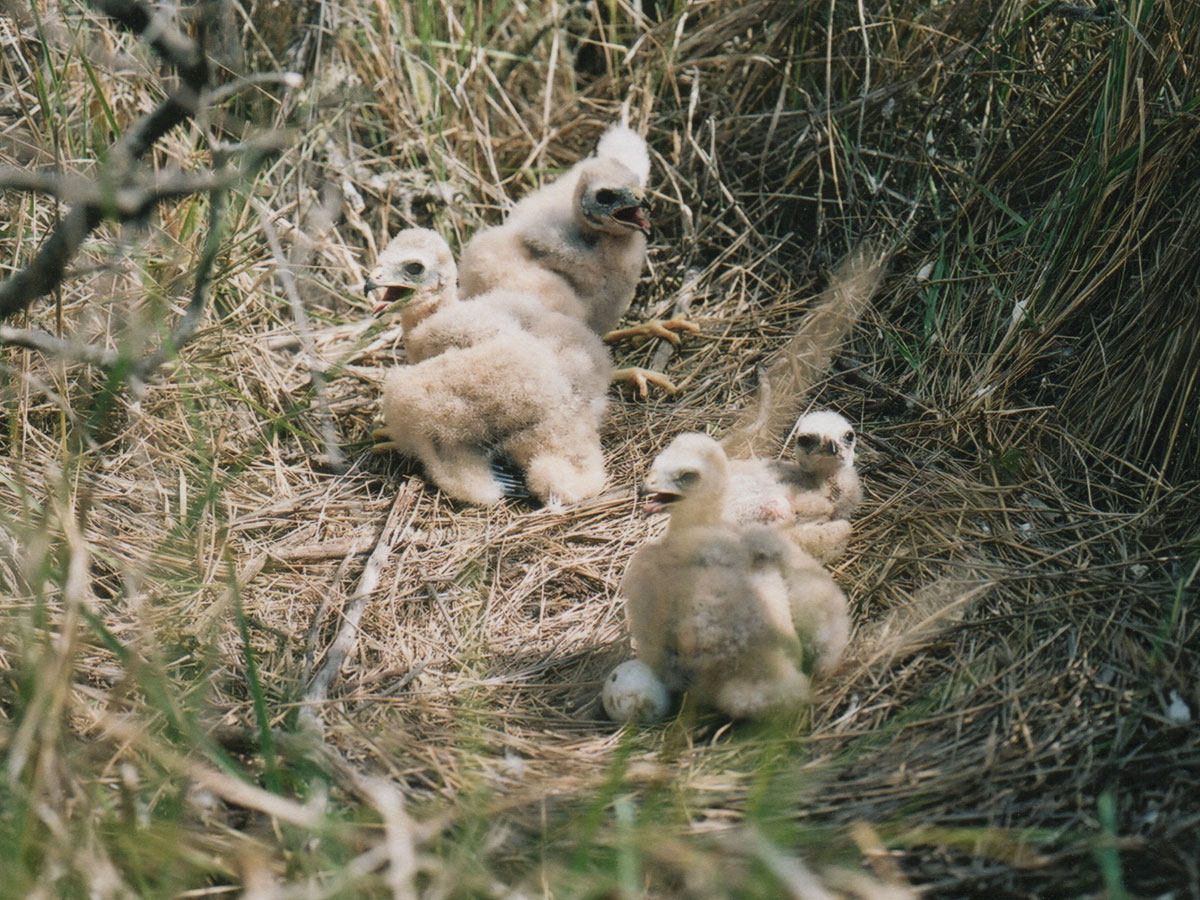 In this early passage from the book Gracious Wild: A Shamanic Journey with Hawks, I share the excitement of finding a nest of a pair of northern harrier hawks. I later confirmed that this discovery was not only novel for me, it was the first ever northern harrier hawk nest found on the island.

I joined Jack one evening out above Karana Canyon to help set the live traps. Our hike brought us past the coreopsis forest and stone cross, but the female harrier didn’t meet us at the trail. I figured she wasn’t around because I had company. Jack and I trekked through the canyon and came out on the west side. We worked at specific GPS points for a couple of hours, setting up a grid and pounding stakes into the ground. Then we walked through and set one hundred traps. As we worked, our movements occasionally attracted attention from the male harrier I knew so well. The hawk would circle low, call loudly, and sometimes approach us in a shallow dive. About the time we were finished I couldn’t take any more. I looked up at Jack. “So is it time to look for a nest yet?”

He looked back at me with the same gnawing enthusiasm.“Yeah, let’s see what we can find.”

A smile crossed my face as we left the grid of open mouse traps and began to weave through the brush. I kept my eyes on the male harrier, gauging his intensity in relation to our position. Without realizing, I was testing to see if a game of “hot and cold” would work. The hawk would convey “you’re getting warmer” by erupting into steady cries and moving in for a shallow dive over our heads. “You’re getting colder” was reflected by a cessation of calling and a distant circling. The harrier was clearly saying “stay away from my nest” while also pointing out where it was. I wondered if by this time the hawk was feeling conflicted. I know I was, because it seemed we were right on top of the dang thing, but we just couldn’t find it. I don’t know how many times we crossed the same ground. We had searched the area for nearly an hour before I heard Jack’s startled voice. I turned on my heels just in time to see the mother harrier launch straight up and out of the brush.

“Here it is!” He yelled the obvious as I was already on my way over. Now we had a furious mama hawk overhead. She had apparently been sitting on that nest just stewing as we wandered around her. Now she was glad for the opportunity to tell us off. We stood with the nest at our toes, staring at the five white eggs in the center. Despite our amazement, we still had to duck to avoid the talons of the mother. The father, by now obviously worn, remained in a supportive role, calling and circling at a distance. The nest was tucked inside a small opening in a stand of lupine and coyote brush. There was a ring of neatly placed and stamped grasses in which the eggs rested. We took a long look at the surroundings and made a mental note of the location, so we could visit again to monitor the nest. The daylight was waning. “You got it?” Jack asked.

“Yep,” I answered as we moved from the nest in tandem and hiked back to the warmth and light of our cabins. My nose wouldn’t stop dripping. We were right in

the path of the chilling wind off the open ocean. In all of my excitement, I hadn’t realized that my fingers were numb. As we made our way through the canyon and past the stone cross towards home, I realized just how close this nest was to my cabin. I could see it from my kitchen windows. Every morning when I sat eating breakfast and sipping hot tea I was watching harrier territory. This explained my frequent sightings of them drifting over the rolling hills of purple lupine and the occasional surprise of a harrier flying within inches of my window.

The morning before the airplane came to take Jack and I back to the mainland, we went to the nests to get GPS coordinates and take photos of the nest habitat and nestlings. Two new chicks had hatched in the first nest. Their down was a pure cream color and it was all they could do to lift their young heads as we approached. Huddled at the edge of the nest, their breath was barely evident from the sides of their bellies. The three eggs of their nestmates sat in the nest bowl, still waiting to expose the life inside. Their mother did all she could to harry us from the nest. We left quickly, with passing glances over our shoulders to see if the mother would land on the nest to warm her young. She remained with us, scolding and chasing until we reached the stone cross. Then she was gone.