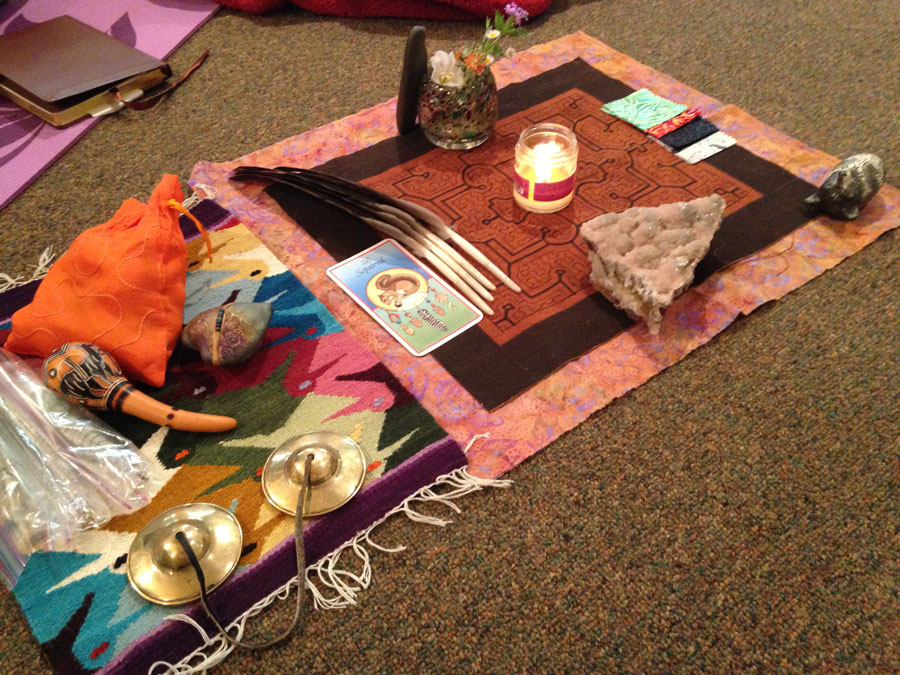 In this excerpt from my book Gracious Wild: A Shamanic Journey with Hawks, I share the story of the first time I ever taught a group to go on a shamanic journey. This was an incredibly frightening thing because the women I was teaching were of such high intellect and integrity. I was humbled by the fact that I could have anything of value to teach them and that they, these gorgeous, empowered women, would trust me with this piece of their process. For all of us, opening up to talk about matters of the soul was a rare and vulnerable experience. To this day, I have the same experience with every group that I teach. I am awestruck by everyone’s brilliance. I couldn’t be any more fortunate and it is amazing to think back ten years and see the amazing gift this seed planted on the evening of this story grew into.

Five days before the meeting with my friends, to my complete shock and horror I came home to a full-blown construction site. My house sat on blocks with a three-foot trench dug around all sides. Parts of the foundation had already been jack-hammered away. There was a huge mound of dirt circling our home and the yard was littered with tools, supplies, trailers, and wood. I had left that morning to a quiet neighborhood, my house fully intact, with no warning that this was coming. The owners of the house we were renting had decided that three quarters of the house’s foundation should be torn out and replaced. I had no phone for twenty-four hours and no rest for days. The workers would come at 7 a.m., turn on their stereo, and start slamming away at the foundation underneath our bed where we slept. The noise upset our dog so much that I had to take him to work. Everything was thrown on its head.

Clearly, to create a sincere environment to house my new soul family, I needed to tear down my outdated foundation. All the beliefs I held true and dear in the world needed to go. I couldn’t guide a group into other worlds if I was fearfully holding on to this one. This message was coming through so plainly that it was manifesting everywhere I turned—physically, emotionally, mentally, and spiritually.

My soul sister was also showing me how to release my roots. Graccia had moulted (shed) two of her old tail feathers in the center of her tail. By the time the three women I’d invited made it to my doorstep, I was down to bedrock. I had no idea what to expect and with no ground to stand on I placed my fate entirely in Spirit’s hands.

Like the beaver felling the tree, we began construction on the dam that would serve as the base of our new lodge. We gathered in my living room around a small candle on the wool sun deity blanket I’d spread out. My old yellow lab plopped down in the middle of the group,lavishing in lengthy belly rubs and occasional hugs.His fur collected in handfuls on the dark wool blanket.Everyone remarked on how soft his coat was and settled into comfortable conversation. We talked about the simplicities of the day and each woman, not knowing the other, settled into fresh relationships. Among the four of us we covered over twenty years, but in this room we regarded each other on level ground. My black cat Gretchen joined us, sauntering in from the bedroom on her long legs. She stretched out on the sofa overlooking the circle.

I began the evening by inviting each woman to talk about a place of honoring, meditation, or contemplation she may already have set up in her home. Quickly we learned that each one of us had, even if by happenstance, assembled an altar—a sacred space—in our homes. It was good to give voice to these places and to honor them in the circle. These spaces were quiet manifestations of our inner knowing, physical representations of life outside the mundane. Each woman spoke lovingly of these places and the support they’d received while being there.

I had a new set of animal cards that I unwrapped as we talked. I’m typically very superstitious with these decks of cards. The first card I see by mistake or on purpose is always the one I go with. While unwrapping the deck I carelessly turned it over and caught a glimpse of the bottom card. It was horse. This was perfect. I had journeyed the night before for instruction on how to advise my friends. One piece of guidance was to suggest each woman call in a horse to accompany her on her journey.

I pulled the card from the deck, and before I could lay it in the center of the circle, one friend, then the next, asked to see the picture on the card. As the card passed hands around the circle, we each shared about our relationship with horses. The room was split right down the middle between those who loved and those who wrote off horses. It was refreshing to hear the varied perspectives because in the mosaic of stories sat each woman in her truth. One friend asked me to give instructions on how to go on a shamanic journey. I hesitantly entered into lecture. These were my colleagues and mentors, and I found it hard to take a position of authority in the group. I quickly realized that I had information to offer that they couldn’t find many other places, and my friends valued it as much as I did.

I started by explaining the basic shamanic perspective of the cosmos. “There are generally believed to be three worlds,” I described, “lower world, middle world, and upper world. Lower world is generally of the earth and tangibles. Middle world is where we currently sit but free of time and space. Upper world is commonly of the ethers and subtleties.” We talked about power animals and helping spirits. I gave them a series of phrases to clarify the idea of helping spirits—“ancestors, angels, spirit guides, and archetypes.”

Each woman shared that she was already in a relationship with a power animal or helping spirit. None of them had visited a shaman or done a traditional shamanic journey. My friends had found their own ways to connect with Spirit. These women had vivid imaginations, which I explained was the key to the shamanic journey. They had already been journeying in their daytime and nighttime dreams, and it was my job to teach

them how to visit these spirits and places intentionally. I gave them the ground rules for safety, explained how to travel to these other worlds, and instructed them to ask their guides for help. “I will drum for about ten to fifteen minutes,” I told them, “and then I will give the callback beat, which sounds like this.” I played seven beats in three sets followed by a fast rumble beat, and ended with seven more beats in three sets. They all lay down, one around my yellow lab, another on the yellow lab’s bed, and another in between. I dimmed the lights and began playing my drum.

I was immediately enraptured by the sounds that rose out of each beat. The drum filled the room with twenty tones and moved the floor beneath us. Looking back, I jokingly feel fortunate that the vibrations didn’t send the house off the blocks. In all honesty, I did not play that drum. She played me for the twelve or so minutes my arm could keep up. All the hesitancy, fear, and anxiety I felt over holding a group of such high caliber was completely overwhelmed by the music of the beats. Whenever I’d start to get self-conscious, my drum would pull me right out or in, depending on where I needed to be.

Before befriending horses, people could only travel so far. Through the beat of my drum, our allegorical horse, my friends and I traveled into other worlds. We had experiences that spoke of light, letting go, finding balance, and moving forward. The metaphors in their journeys wove a natural web through the circle. Two saw a yellow light in the northwest. Another pair had the experience of being hollow and full, being split between left and right, being heavy and weightless. Three of us never made it onto our horse’s backs. We were all bewildered to one degree or another over our journey experiences, but  the compassion we extended into the circle held us all in a good way. It was no coincidence that on my journey that night I followed a spirit red-tailed hawk into another world. The magic Graccia brought into my life was apparently at work again.