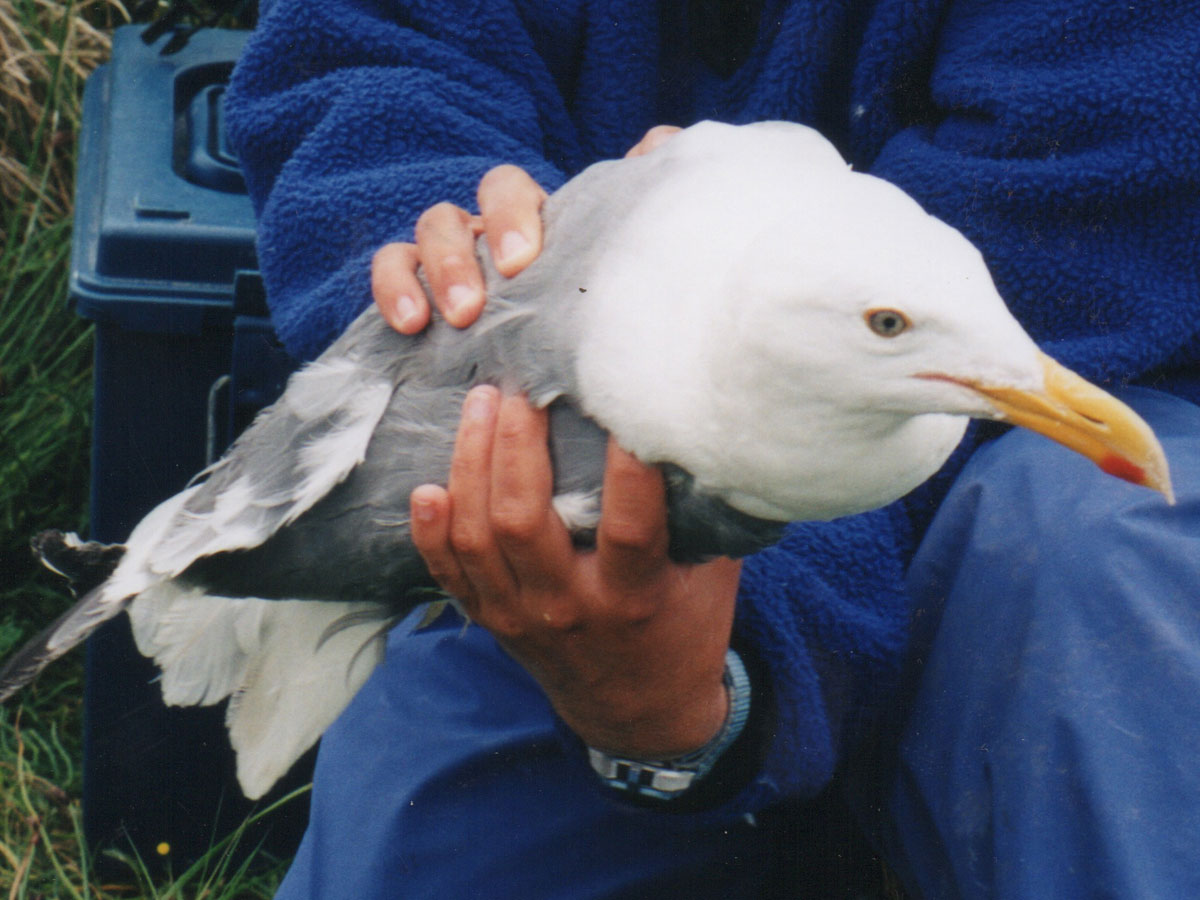 Why do you spot “sea” gulls thousands of miles from the ocean? Do you know if all sea gulls look alike or how many places on earth they can be found? Have you stopped to think where you would find a seagull’s nest or chicks? Have you considered how gulls fish?

These were all questions I didn’t have the answer to before the summer of 1999. Then I was offered the opportunity to work with a PhD student from the University of Washington. She was studying Glaucous-winged x Western Hybrid Gulls on the Washington coast.

Quickly I learned that gulls were the unseen birds in my life. I didn’t even have the basics down. First of all, ornithologists refer to seagulls as just plain “gulls” instead of sea gulls. The distinction is made because not all gulls rely on the ocean for their livelihood. Secondly, there was no one species of bird called a seagull. There are more than four dozen species with various plumages, life histories, and habits. This fact alone opened up an entirely new world to me.

Many people, young or old, who first enter into birding have this original epiphany about the nature of things. What they used to think was a “finch” now could be any number of species of finch from a purple finch to a pine siskin.

What in your life have you been glancing over with the assumption that you know what you’re looking at? Remember that just because a bird or animal or topic or activity is plain doesn’t mean it’s worth dismissing. Stop and take a look. When exploring what does seagull mean as a spirit animal, it might be time to immerse yourself in the ordinary to start to understand how nothing in life is such.

Once I had the amazing opportunity to trap and hold a live gull in my hands I was overtaken with how magnificent he was. His white head and breast, and bright yellow beak marked by a striking blood red dot were extraordinarily clean. I felt as if I’d never seen such pure, true colors in the natural world. To see these true colors amidst the muted sky, gray sea, and beige shore made him that much more blazing. His waterproof coat of feathers was luxurious.

And, that was just his appearance. His spirit was fierce and strong. The gaze from his small but complex eye was what I would have expected to encounter from a hawk or tiger. 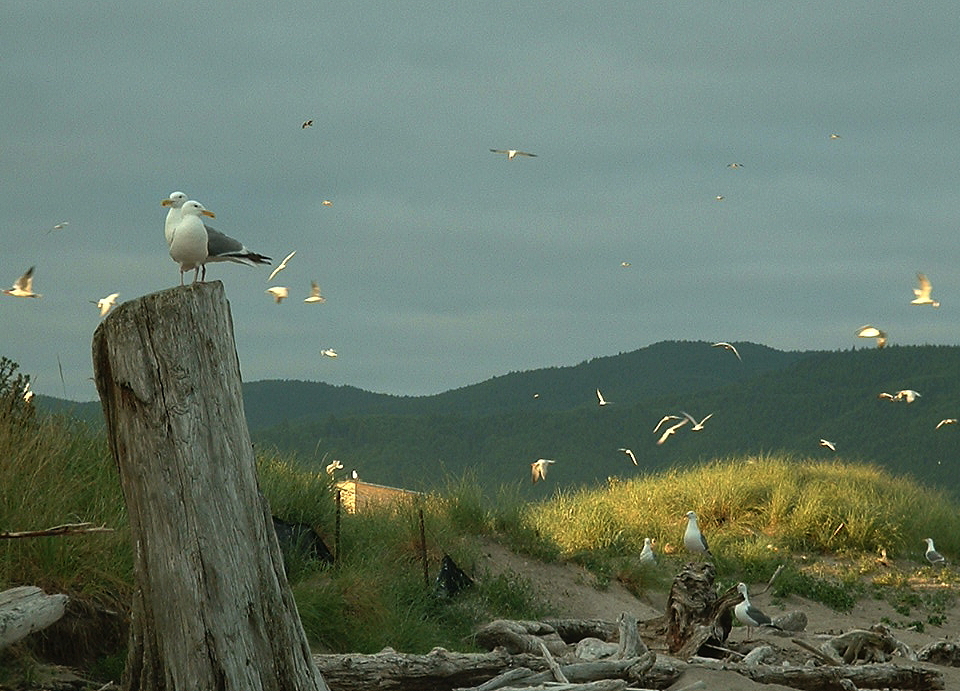 A study conducted in 1976 confirmed that gulls are actually attracted to their predators. A colony’s alarm regarding the predators is strongest when the predators were seen previously with a dead bird [4]. The birds are able to distinguish particularly lethal threats.

I remember the experience of walking uninhabited, sandy islands in the middle of broad harbors with a swarm of gulls overhead calling the alarm. Oftentimes, a bird would fly low and look me straight in the eye. There was nothing gullible or ordinary in that glance. They were acutely aware of what I was up to and on watch for any danger I presented.

What Does Seagull Mean?

Gulls are consummate opportunists, thus the reason why we see them so often associated with human civilization. They can  hunt for their own fish and crabs or steal catches from other seabirds. Gulls will beg for crumbs from tourists and scavenge the shore for crustaceans buried in a pile of kelp. They are also relatively bold, willing to bob around in the fray of a busy feeding frenzy and snatch any opportunity that comes by even if it happens to be hanging out of the mouth of a seal. Western gulls will  steal milk from lactating seals. Glaucous-winged gulls have been seen hunting live, terrestrial prey such as rodents [1][2].

All gulls, like many seabirds, swallow their prey whole. To look at the meaning of seagull we need to understand the important relationship here between the name “gull” and the words “gullet” and “gullible”. It seems that the term gullet developed first in reference to throat with the name gull referring to the bird following a couple hundred years later.

The word gullible followed an earlier use of the general term gull which meant to dupe or sucker in reference to “someone who will swallow anything thrown at him” [3]. We have added the negative connotation to the idea of a person that believes anything he’s fed. However, we see that evolutionarily seagulls have done extremely well with this approach.

Once again, we see the theme of not taking anything for granted and not leaving any opportunity untapped. Are you passing possible opportunities by because of what others may think of you if you don’t appear discerning? Are you picking apart the divine gifts in your life because they aren’t impressive or stunning enough?

Maybe it’s time to drop the judgement for awhile and allow yourself to gulp life in. Sounds scary, I know, but with seagull spirit animal you can test this bold way of being in the world.

Gift of Being Ordinary

There is a theme of conventionality and commonality here. It’s worth challenging the parts of yourself that you consider ordinary. Being ordinary is not a handicap. Even in their abilities, gulls are pretty average. They aren’t the deepest divers, fastest fliers, or most aggressive fishermen, but because they haven’t specialized they have been able to adapt and live all over the world in a vast realm of habitats. You may want to consider stepping out of a specialization for awhile and being more flexible.

This brings me back to why I ended up working on the research project about gulls so many years ago. I had always wanted to study marine mammals, specially dolphins and whales, and despite my best efforts at specialization I wasn’t able to land an internship. So, I stepped back, let go, and decided I was willing to be a bit more ordinary if that’s what it took to be in the larger field of marine biology. Then I was able to find work and have a chance to be in the field working hands-on with wildlife like I’d always dreamed.

Most species of gull have a gray cape of one shade or another speaking to the ability to carry the “gray areas” of life with ease. If you are adept enough to know the species of gull you have sighted and are studying, take particular note of the distinguishing marks. Black caps speak to a mysterious connection to the divine realms and being willing to release your thoughts to the unknown. Black wingtips speak of slicing through the mist of confusion or illusion. A red beak speaks to passionate expression and red legs to grounded passion.