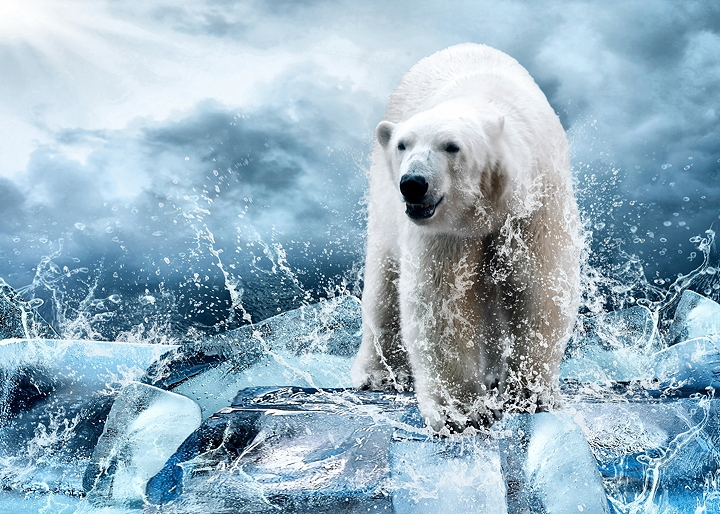 His world is frozen, with landmarks often hard to find. To make matters more challenging, the wind constantly moves the drifts and the floes carrying his plans and thoughts asunder. He does not have a preference for one way, the way, but rather relies on the wisdom of the ages and the abundance of the underworld to carry him through. He’s been doing this for a long time you see. He was the one who knew who we were before we did.

When we see a polar bear’s coat we assume that the individual hairs are white, but they are actually clear. The translucent hairs scatter sunlight with no preference for any particular color ray and, thus, they appear white. This brings to the fore an incredible truth as the color “white” is often associated with goodness and purity, but “white light” is interpreted differently. White light is synonymous with Source, God, and divinity. Polar bears, like the stark, snow-covered landscape they live in, reflect divine light. If a polar bear has walked into your imagination, dreams, or ordinary world , now is the time to pay homage to the blinding beauty that is the Creator. The immense size and presence of these apex predators gives additional gravity to the message.

The longer guard hairs of a polar bear’s coat are hollow as well as transparent. The hollow hairs were originally thought to conduct the sun’s warmth down to the  bear’s black skin, but this theory has proven false. Most of the heat from the sun doesn’t make it past the polar bear’s incredibly dense coat. Through the qualities of his hollow fur, Master Polar Bear, demonstrates how being a hollow reed can reflect divinity out in to the world. It is so clever that scientists used to think the hollow hair conducted the energy of the sun to the bear’s skin to warm him, and now we know this is not true. In your own life, examine your beliefs about why you have decided to be a channel for grace. Do you believe allowing joy to move through you will bring you more joy? Are you afraid to allow the light to move through you for fear you’ll be overheated or overwhelmed? Do you spend all of your time trying to clear yourself so that you can be a channel for healing? The polar bear spirit animal has come to guide you through this process, and before we barely get below the surface we see the first set of lessons about appearances and beliefs concerning channeling divine energy. Being perfect or pure or good is not the goal, radiating the divine is.

There is a compelling parallel between the polar bear’s fur and snow. The multi-faceted ice crystals of snow flakes cause all color rays to bounce around, not absorbing or reflecting any color with any consistency, which causes us to see the snow as white in the same way we do the polar bear’s fur. Many dream interpretation guidebooks define snowflakes and snow as “frozen emotions,” but I particularly am interested in the less common idea of these representing “spiritual truths”. The spiritual aspect coming from the white light they reflect and the truth coming from the concrete form of an ice crystal. Also, like any spiritual truth, snowflakes are temporal and infinite in nature. We all know that no two snowflakes are alike. Being of the land of snow, polar bears bring an innate ability to connect with the nature of spiritual truths.

There is intense contrast in the realm of the polar bear. He lives in a white, seemingly barren landscape, but just below the surface he has easy access to a dark, fertile underworld. The ocean that he navigates as effortlessly as the top world is teaming with life. His own physique mirrors his outer world as his hollow, transparent fur hides a black skin covering a thick layer of blubber over 4 inches thick. He has a hard time staying cool in one of the coldest environments on earth. This shows that although you may appear to have a stark life on the surface, you hold vast resources below/within. How can you begin to see your life inside-out so you may honor this abundance more fully? Is the contrast jarring you at this time? Master Polar Bear has come to help you walk and swim the duality with grace.

In the mythology  of the Inuit, polar bear spirit animal is known “Nanook”. Many northern tribes say polar bear is the one that taught man how to hunt and survive. In Greenland he is known as “Tornassuk” the master of helping spirits and the main agent of initiation for shamans. The Inuit too saw him as the primary guide for shamans. In many traditions, he is rumored to take a human shape, being a human while inside the igloo, which he also taught humans to build, and a bear while out on the ice. One artist has dedicated her life’s work to depicting the white bear. I’ve known since childhood and always adored Barbara Stone. In the 35 years she’s been captivated by the polar bear’s presence, she’s traveled to the north to observe them dozens of times. Her whimsical artwork shows the bears taking baths, sitting down to tea, and out tending the garden, and readily demonstrates how these massive creatures can easily assume our form. She has tapped in to an archetypal, subconscious knowing of how we are linked with these animals.

Ice plays a critical role in the life of polar bears. Their migration follows the flow of the polar ice pack. Polar bears need the ice to ambush their surfacing prey from. When ice is less prevalent polar bears will swim hundreds of miles to new ice floes in search of hunting opportunities. This speaks of the usefulness of having a solid, but fluctuating boundary between our outer and inner worlds, to trusting that what we need will come from the unknown of the dark depths below, and to knowing when to put in concerted effort to seek out new nourishment. Ice being more permanent than snow, it represents frozen spiritual truths, and polar bear can show us the need to freeze some of our beliefs into the ground we walk on for a time. When the seasons change and the time comes, those beliefs will naturally break up or move on and new floes of ice will form to support us. There may be some time between the old beliefs and the new, and polar bears will fast for a time when the ice floes are absent. This is a reminder that it is okay not to have beliefs to stand on for a time, and that you have the reserves built up to last you until you are supported in freezing up a new belief system.

The diet of polar bears consists mainly of seals. Seals are linked with creativity and the imagination. Thus, we see here the need to harvest the fruits of our creative endeavors rather than solely allow them to surface for breath on occasion. Time to haul that beautiful gift of yours up onto the ice and allow it to provide the sustenance you need to take you into the next length of time between projects.

Mother bears typically have twins which again highlights the dual nature of these white beasts. The number two is significant here and it may be worth your time to look into mythology surrounding twins. Have you given birth to two ideas at once? How will these creations co-exist? Mother polar bear may be able to help you with these questions. Just know that she does not wean her young for 2 and a half years, so this process of raising two dreams at once may take some time. As always with the polar bear spirit animal as our teacher, patience is a virtue not to be forgotten.

It turns out these great beasts have a great amount to teach us. It is even worth looking in to what spiritual masters and mentors have made a difference in your life. Which of these teachers radiated the divine without preference for a given color, way, or understanding? Who was willing to offer guidance without attachment to the outcome, purely for the bliss of sharing? Who gave support and knowledge to you without asking anything in return? These are the Master Polar Bears that have wandered into your life in human form. Watch carefully what they do for they will teach you how to survive in an otherwise inhospitable environment.

Stacey L. L. Couch, Certified Shamanic Practitioner, works as a publicist and journalist for Mother Nature and is the author of Gracious Wild: A Shamanic Journey with Hawks. She empowers people with the ability to explore life’s big questions by calling on nature, story and synchronicity as a source for guidance and healing. With over ten years of experience in the field of shamanism and thirteen years experience working with wildlife and rescue animals, Stacey has a unique blend of rational and mystical perspective that makes the world of shamanism easily accessible to others. She values mindfulness, wonder, and compassion in her daily spiritual practice. Learn More about Stacey.