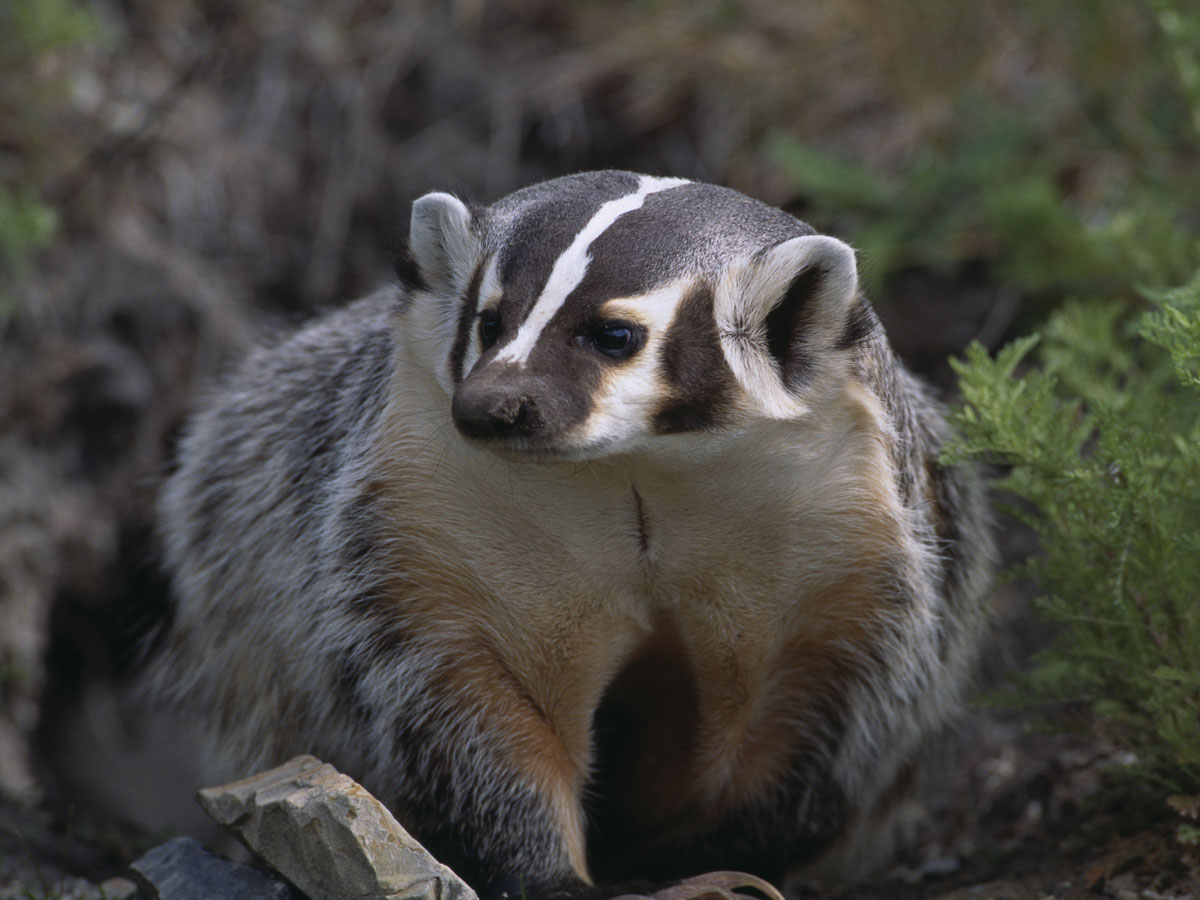 He prefers only to leave his burrow when necessary. He would rather not encounter anyone besides his next meal when he’s out. His responses to inquiries from others are gruff. If he decides to respond at all.   He would prefer to go through the effort of adeptly and quickly digging a new hole than to face whomever has decided to pester him. Whoever does push too hard will find that he does have a backbone. When cornered Mr. Badger will not back down. He will fight fiercely and inflict serious damage. His companions are dirt, roots, and stones. He is fulfilled through his connection with the Earth. His solitude brings wisdom.

The consummate introvert, badger lives alone in a network of underground burrows. He will usually go out day or night to dig for his favorite meals of grubs, worms, and rodents. If he lives in a populated area he will change his schedule entirely to avoid humans and will become nocturnal. How many introverted people do you know that are the same way? Are you this way? The meaning of badger is to help you release the guilt associated with being a recluse and stand in your truth. Do you find you’re easily irritated at rush hour? It may be time to adjust your schedule.

Badger does have a few friends and can be seen cooperating with coyote to find rodents to eat and will associate with his own kind during mating season, but his friendships are pragmatic and he mostly keeps to himself. He has a lot of time with his claws in the Earth to make friends with the plants and minerals. For this reason, Mr. Badger is a great ally to help you understand the healing power of the Earth. People who keep jars of roots and piles of stones in their cupboards have badger medicine in their bones. Many people do this and do not understand what to do with all they’ve stored away in their dens. Badger spirit animal can help them sort this out while waiting out long winter storms.

Just because badger limits his contact with the outside world does not mean he’s not wise about it. Mr. Badger is actually an acute counselor because he is able to connect, without distractions, to his study. He can see and effectively dig below the surface of any situation without judgement. What he uncovers in the subconscious is sustenance for him and he is familiar with these things. He does not carry all the usual fear of the unknown below the surface that we do.

The term “to badger” comes from a terrible sport called badger-baiting wherein a dog is released into a badger den and is encouraged to attack the badger. When the two become locked together they are drug out by the dog’s tail and extricated from each other. The badger is placed back in the den and the fight is started all over. This goes on for many rounds. When we are feeling “badgered” somehow we feel the energy behind this scenario. We feel attacked in our sanctuary over and over again, all for sport. When asking yourself what does badger mean ask yourself if you have entered into this unhealthy cycle. Now is the time to recognize that you have the power to move on, create sanctuary and dig a new burrow away from this madness. The claws and strong will you possess cannot be won over by such shallow and cheap means.

The mask of the badger is in stark contrast to their course, mottled gray and tan coat. It is believed that badger got his name because his mask resembles a “badge” as in a coat of arms. This obviously speaks to the fighting ability of badger, but many hermits wear their solitude like a badge. Introspection can lead to great wisdom worthy of a badge of honor, but just remember that this medicine out of balance can lead one to become to a judgmental, gruff curmudgeon. The line between the two ways is as defined as the white streak splitting down badger’s head. Badger spirit animal can help you walk this line to come to a place of both enlightenment and kindness.

“There’s no security, or peace and tranquillity, except underground. And then, if your ideas get larger and you want to expand–why, a dig and a scrape, and there you are! If you feel your house is a bit too big, you stop up a hole or two, and there you are again! No builders, no tradesmen, no remarks passed on you by fellows looking over your wall, and, above all, no weather. Look at Rat, now. A couple of feet of flood water, and he’s got to move into hired lodgings; uncomfortable, inconveniently situated, and horribly expensive. Take Toad. I say nothing against Toad Hall; quite the best house in these parts, as a house. But supposing a fire breaks out–where’s Toad? … No, up and out of doors is good enough to roam about and get one’s living in; but underground to come back to at last–that’s my idea of home.” ― Spoken by Mr. Badger in Kenneth Grahame’s The Wind in the Willows