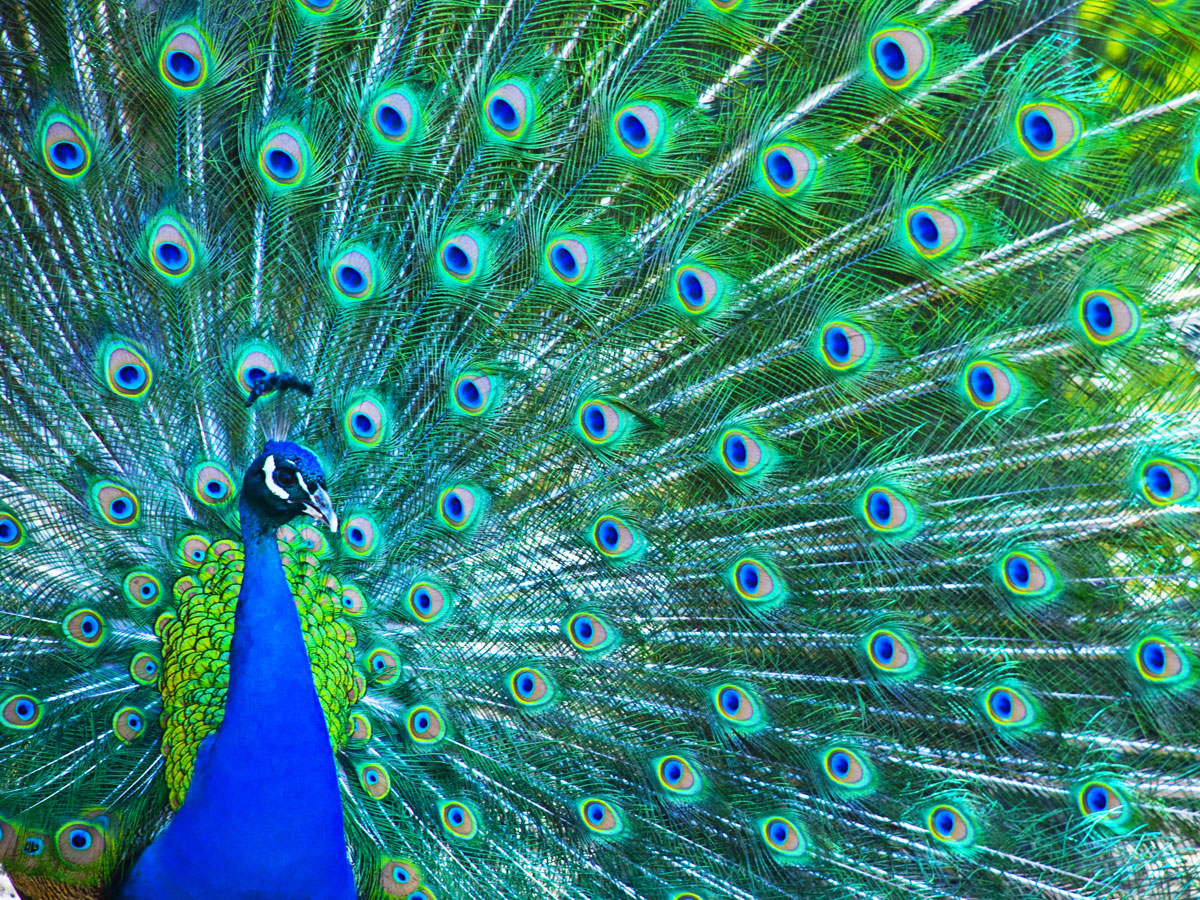 The myths and legends of countless deities are soaked in peacock symbolism and adorned in the peacock’s iridescent tail feathers. Let me start with the short list of gods and goddesses that are associated with peacock meaning: Jesus, the Greek goddess Hera, the Hindu gods Shiva and Indra, the Greek god Argus, and the Hindu Lord Krishna. Not only are all of the friends of peacocks often deities, most of them are also the royalty of the heavens, the supreme of the sublime. In addition, peacock was considered the empress’s bird in Byzantine and Roman imperial courts.

Now does this mean that if you have peacock spirit animal that you are destined to be king or queen? Likely not. Metaphorically, royalty represents respect, mastery and authority. How are you ruling over your own kingdom these days? Are you an angry despot or a benevolent monarch? If you were your own subject, would you be pleased with the rules you are told to live by? Peacock symbolism helps you develop respect for the self, mastery over your actions, and the authority to carry out virtuous living.

The most notable and common mythology about the peacock has to do with the one-hundred eyed Greek god Argus. He was employed by the goddess Hera to prevent her husband Zeus from philandering with the goddess Io. Zeus promptly had Hermes kill Argus, and Hera commemorated Argus by placing his one hundred eyes in the tail of the peacock.

Peacock has more than one hundred eyes in, as author David Carson calls it, his “trembling fan of dazzling colors.” [1] Regardless of the exact number, there are a lot of eyes animately watching us from the intimidatingly tall display that follows the peacock wherever he goes. With peacock symbolism, we learn about watchfulness and being the witness in our lives.

Being a witness is often equated with the Buddhist quality of detachment. Detachment is not callousness or uncaring, but a trust in the divine design of things. When you are detached you don’t have an agenda or a judgement in the situation. You are able to just show up for the moment simply how it is.

Wolf spirit animal also models qualities of the witness, but he does it unnoticed and at a distance. Peacock spirit animal, in contrast, is in your face and can’t be missed. With wolf, the hairs on the back of your neck stand up and you feel like someone might be watching. With peacock symbolism, there is no way to deny that all eyes are on you. Since the eyes are on his tail, there also can be the sense that you are being followed.

Are you the one watching others closely or do you feel a higher power watching you? You may not be able to take your eyes off of other people for fear of learning who is watching you. Peacock meaning may have you feeling more self-aware and motivated to clean up your actions.

Notice too how those eyes draw you in. It is exactly the feeling that the gods are watching you that cause you to feel closer to the Divine. It is a hypnotizing, mesmerizing display that captures you in the sacred net of worship.

Peacock is renowned for hunting and killing snakes. It is said in Hindu tradition that peacock transmuted snake venom into the radiant blue color on his throat. “[Hindu god] Shiva’s throat had turned peacock blue when he swallowed and purified the poison of the primordial ocean.” [2]

The fifth chakra, known as the throat chakra, is a power center represented by the color blue. This chakra represents our power of choice and the ability to express who we are and what we feel. We often think of what we send out of the throat chakra, but not what we put in. Think of the poisonous words you swallow before they come out of your mouth. With peacock spirit animal, you can learn how to transmute those words towards a greater end. Choose your words carefully and your understanding of peacock spiritual meaning will grow.

Peacock is only the male name for the entire species of peafowl. The female peafowl are called peahens and young are called peachicks. The peahens are much less brightly colored than the males and they don’t have the elaborate tail with the eye spots. This strong difference between genders is called sexual dimorphism.

Sexual dimorphism represents a sizable imbalance between the masculine and feminine sides of your being. The masculine side has to do with logic, strategy, and action. The feminine side encompasses the powers of intuition, sensing and receptivity. Of course these are large generalizations, but hopefully to get the idea. Those of you that know right brain versus left brain qualities will understand me when I say that the right brain is associated with feminine power and left brain with masculine.

Due to the fact that male peafowl are bigger and flashier, the name of peacock has dominated the image of the species. This shows that the more drab brown peahens take a back seat and largely go unnoticed. Working with peacock symbolism may bring a time of stronger, more visible masculine power with your intuition working in the background. For more insight into this dichotomy, read my article on turkey spirit animal as the same pattern applies with turkeys.

There are many theories as to why the peacock has such an ostentatious tail. The tail is clearly a cumbersome train to drag along when fleeing a predator. It makes flying more difficult and takes an inordinate amount of energy to produce. Scientists have not yet agreed as to why peahens prefer larger tails with more eyes, but they do. So peacocks push harder to survive and go big.

In your own life, how can you shoot for the fence? Now is the time to follow peacock’s example and go all in. What you accomplish may be immensely bigger than you ever imagined possible. And, this will gain you a lot of attention. Just remember that with all eyes on you, impeccability in your behavior will be key.

Furthermore, the displays don’t last forever. Every fall, peacock molts (drops) his entire tail in a matter of days or weeks. He grows an entirely new tail over the course of the winter and focuses his efforts on building up his reserves versus attracting the attention of the ladies. By paying attention to the timing of your efforts, you can come to a peak at just the right time.

[1] How to Find Your Spirit Animal by David Carson [2] The Book of Symbols: Reflections on Archetypal Images by The Archive for Research in Archetypal Symbolism