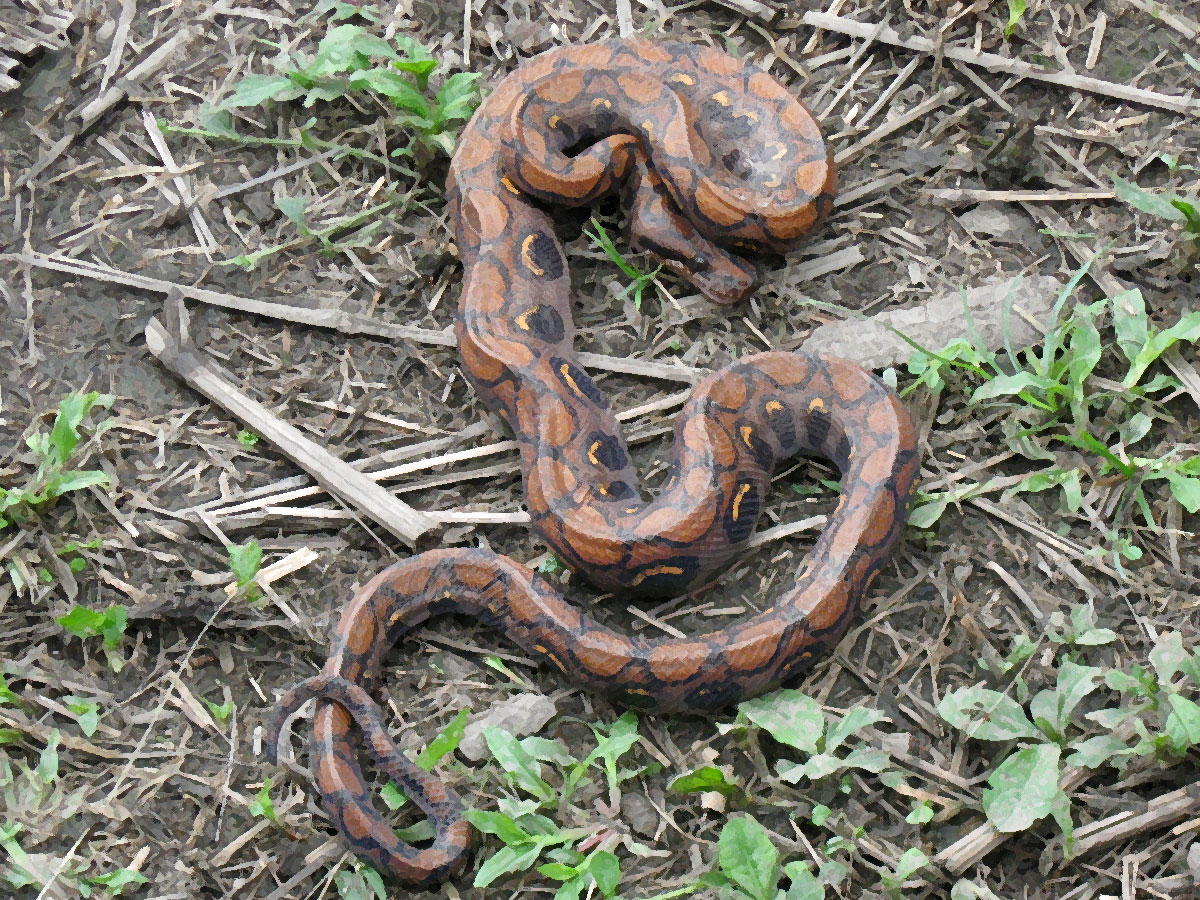 Every single culture of man has more than one myth about a snake and most societies have a creation myth including a snake. Snakes and us, we go way back. Few animals reign supreme like the snake in man’s psyche. To complicate things further, there are nearly 3,000 species of snakes in the world. They live in a wide variety of habitats from jungle to desert and can offer helpful pest control and carry deadly venom. The symbolism of snake is considerably different depending on the species.

If you’ve done any research at all about snake symbolism, your mind is likely twisted up in knots. One reference will call the snake spirit animal a bearer of good luck, rain, fertility, intense power, and abundance. The next will warn against bad fortune, liars, sin, and great suffering.

“The reverence of serpent is universal. No culture remains untouched.”
– Jessica Dawn Palmer in Animal Wisdom

Everyone agrees on one thing, snake symbolism is the embodiment of transmutation. This is best exemplified by the shedding of a snake’s skin. Depending on the age of the snake, this happens one to four times a year, and serves to renew the scales and remove lice. When we say, “I’m going to crawl out of my skin” we are tapping into the intelligence of snake medicine.

Many people feel an overall energetic tingling in their bodies, just under their skin, during a time when they are ready to shed an identity. Aligning with snake spirit animal will help ease the discomfort and antsy-ness that accompanies this transition. Snakes rub up against rocks, bushes, gravel, or whatever they can find to help remove the skin. It comes off in one long piece, like a sock turned inside out. Now may be a good time for a massage or movement such as dance or yoga. Shedding one’s skin is an active process enacted through the friction of rubbing up against events. Conflict and contradiction can be helpful allies.

Initiation of the Venomous Snake

Approximately one-tenth of all snake species are venomous and a smaller portion of those are deadly to man. When considering what does snake mean for you, you will need to at least determine if the snake spirit animal you are working with is venomous or not. If not, the snake will act as a benevolent companion for you teaching you about the origins of life and the cycle of death and rebirth. Also, consider the meaning of snake in relation to healing and medicine.

If the snake spirit animal you are encountering is venomous, the snake will be a galvanizing guide through a fierce remaking of your life. Venom is meant to inflict pain and you may now very well be enduring a painful process. This is an initiation meant to wake up the primal life force within you and help you learn your mettle. You will need to dig deep to find the power to transmute this suffering into a blessing.

Often the suffering is not induced from the outside, but is internal. Anger and resentment fostered over time create an unhealthy buildup of venom in our systems. As Buddha says, “Being angry with another person is like drinking poison and expecting the other person to die.” If you are hearing the warning “hiss” of a venomous spirit animal snake in your ear, turn your efforts to transmuting the poison in your words and in your mind. Prayer can be incredibly helpful during this time as forgiveness is a holy power we need assistance with.

In one myth about Asclepius, the Greek God of healing, he learned how to bring the dead back to life from a snake. He killed a snake and watched a companion snake bring herbs that brought the dead snake back to life. Temples built to Asclepius were hospitals that hosted non-venoumous snakes that traveled the floors among the infirm. The Rod of Asclepius is still used as a sign of the medical profession. The symbol of a snake entwined around a staff is an earlier image first seen with the protective Egyptian goddess Wadjet and later referenced in the bible when Moses raised the brass/brazen serpent in the wilderness. Anyone bit by a fiery serpent for speaking against God would live by looking upon Moses’s brass serpent. Blood from the left side of a Gorgon, a Greek monster with a head made of serpents, is lethal, and blood from the right side restores the dead to life.

In these associations we find that the carrier of death is also the one to deliver cure. This is a very homeopathic viewpoint in that “like cures like.” It may look like a misfortune is simply meant to cause you harm, but the cure is a part of the medicine. This is where we see the true nature of the cycle of death and rebirth as a hallmark of snake symbolism. The snake eats its own tail.

Real-life snakes have poor vision and no external ears, so they sense a lot in their environment by picking up scent molecules on their tongues and pulling them into their mouths to “taste” the world around them. This is why they slither about flicking their tongues. Taste is connected to nourishment. Snake spirit animal helps us determine which environments are most nourishing for us and helps us seek out that which “feeds” us.

Snake fangs are oriented backwards and their jaws are unfused so they can swallow their prey whole. This means they can eat fewer, larger meals. Now may be a time in your life when you come into a time of abundance, more than you think you can take in at once, that will be followed by a long digestion period.

Cool, calm and collected, this cold-blooded animal helps us distance from the drama of life.

Instead of eyelids, snakes have transparent “spectacle” scales, which always protect and cover their eyes. Snakes have no way to close their eyes. Eyeglasses are about putting things into perspective. With the help of snake spirit animal, we can learn to protect our perspective and always keep our eyes open. This speaks of not falling prey to illusion or being caught unaware.