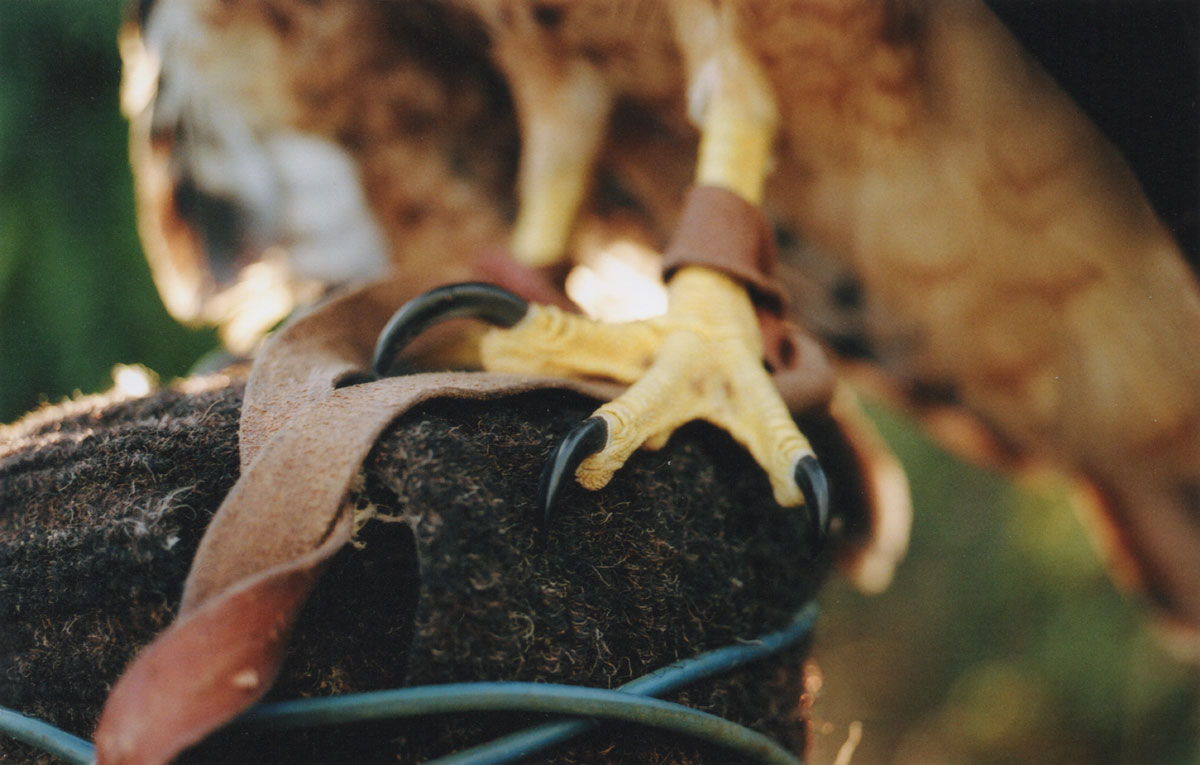 This excerpt from Gracious Wild: A Shamanic Journey with Hawks is near the end of the book and shares some of my most intimate and beautiful moments with the red-tailed hawk named “Graccia”. Graccia is an ambassador bird trained to work with people and go on public speaking occasions to help raise awareness about the value of raptors and wildlife. She went on an average of one presentation a month, but I trained her daily which meant that many of our times together were actually spent alone walking outdoors.

Around sunset a couple days later, everything was cast in a shade of autumn. I shot a few photos of Graccia in her mews. The loud manual shutter of my thirty-year old camera seemed to startle her as the click bounced off the walls in her small room. Once she was outside on her post the shutter was easily absorbed by the landscape. Graccia paid it no mind. I spent about a half an hour standing at various angles to the gracious hawk, aiming to catch both her mood and the feel of the amber sunlight moving through the trees onto her lovely adult coat. I wanted to remember every inch of her: her sweet little toes, her multi-colored leopard skin cape, her soft cream and russet breast, her daring stare, her divinely red tail. By now she only had one baby brown feather left in that sweeping fan of a tail. This was her at her finest, a radiating, blinding light of joy, love, and gratitude. She was ablaze. She was the goddess of autumn, the angel of fiery red trees and deep golden grasses.

I took off my glove and laid it on the ground for a time. I’m not sure Graccia had ever gotten a chance to see my bare left hand. She was curious to watch how and where it moved. I used this opportunity to snap photos of her turning her head just so as she watched my left hand dance at my side. A flighted red-tail called from above. Graccia cocked her ear towards the voice. I clicked another shot. I turned the lens upward to focus on the dot of a hawk against the clear, blue sky and pressed down on the shutter. The wild hawk drifted up and out of sight. I circled Graccia and captured the last rays of sunlight basking on her tail.

On occasion I asked Graccia to hop to my glove. She chirped and cried over the beloved bits of quail. While she stood on my glove I leaned over and touched my nose to her right wing to draw in her smell. I adored her scent and did this as often as I could think to during our last times together. She smelled like a soft bed, a late summer wind, like leaves crunching under your feet. In those breaths of hawk I’d see mountains from above. The story of the world is told in the aroma of red-tail.

I felt along her smooth toes and ebony talons. I ran my fingers up her keel, dancing them through her thick down. She adoringly nibbled back on my hand. The daylight began to fade and I felt the eyes of the ominous wild great horned owls wandering our way. I went to take her in before her baby cries for food brought the owl’s talons to us.

On our next outing together, Graccia and I walked through many of the tasks she had learned during our year together. I asked her to the glove without food and she thought nothing of it. I set her on the scale and she stood there quietly while I read the numbers. I backed her into her travel box and she calmly stepped inside. She did all of these tasks skillfully without food reward. This was the measure of an accomplished ambassador bird. I was pleased. Serving me was apparently reward enough for Graccia. Her weight was surprisingly low and she was very hungry despite the glut of food we’d been serving her. I surmised that she was using a lot of calories trying to generate half a set of primary feathers on one wing. I took her into the clinic kitchen to prepare a mouse to chase the quail she’d already eaten. Her usual apprehension over the clinic was absent. She waited patiently as I thawed and prepped the mouse with my one free hand.

We walked out to the fencepost perch in the dim blue light fading from the day. Usually Graccia was fidgety this time of the evening. I often teased her when she’d get edgy in this light—“we need to get you inside before you turn into a pumpkin.” Now it was pumpkin season and Graccia was unconcerned. We stood for a short time, her on the post and me at her side. We faced the three-quarter moon rising over the harvest season. There was a chorus of great horned owl voices carrying from the woods nearby. We listened to the haunting hoots. I kept my eyes sharp for the ghostly owls. I could easily sense that we were walking a razor’s edge between the worlds. The remaining refracted sunlight held us in one world and the voices of ghosts beckoned us towards another. I was at once comforted and uneasy. The landscape and moonlight were enchanting. The nearby nighttime predators were disconcerting. I hurriedly called Graccia back and forth from the perch to the glove until her meal was finished, and hastily turned from the dark woods to carry her back to her mews.