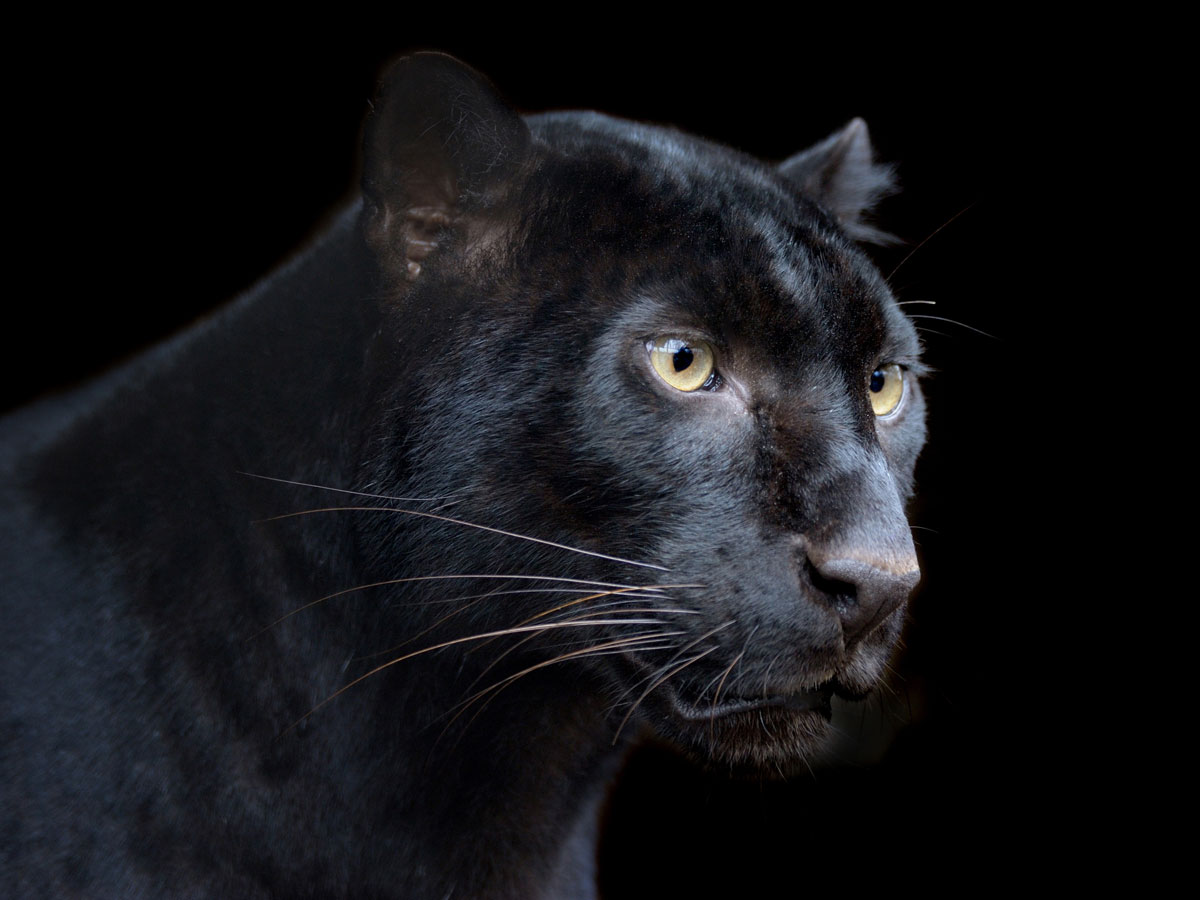 Typically, I like to stick to explaining species (such as the red-tailed hawk or barn owl) or a general group of species (such as turtle or eagle) when writing spirit animal articles, but in this case, I am making an exception. Black Panther spirit animal looms so large in our psyche and mythologies that she warrants unique treatment when considering interpretation.

Is Black Panther a Jaguar or a Leopard?

Black panther is a blanket term to describe an uncommon, specific color variation, known as “melanistic”, of either leopards or jaguars. Melanin is the black pigment found in excess in the coats of these large cats. Leopards live in Africa and Asia. Jaguars are found in Central and South America. Jaguars are larger, stockier and more muscular with broad, boxy heads and a shorter tail. Both species inhabit a wide variety of habitats from savanna to swamp to dense jungle.

This begs the question – Do you need to know the species of the black panther you’ve encountered (in dreams, journeys or waking reality)? Not necessarily, but it will help you understand the nuances of this spirit animal more clearly. The mythology of jaguars and leopards is as different as Hindu and Aztec cultures.

Fitting in with the Family

Interestingly enough, the melanistic gene (that causes the black coloration) in jaguars is dominant and in leopards is recessive. This means that a black jaguar must have at least one black coated parent, but a black leopard can be born from two spotted parents. In a given litter of either species, both spotted and black panthers can emerge.

All of this points to the idea of the “black sheep” and feeling like you don’t necessarily fit into your family. Someone with a black jaguar spirit animal may feel a stronger association to one parent than another, where a person with the black leopard spirit animal may wonder whether she was switched at birth. Black panther spirit animal in general causes us to sit with the question of how we fit in with our parents and siblings. What have you inherited from them? What has skipped a generation?

Black panther symbolism relates to comfort in the mystery of where you came from and how you fit in, bringing the wisdom that not everything needs to fall in line and fit perfectly.

Creature of the Dark

The black panther is most obviously associated with darkness. We are inclined to believe that being solid black would mean a distinct advantage for a hunter, but according to experts on the Shooting authority website, a solid color means a solid outline which is much more visible to prey than an outline broken up by spots. It is believed that for this reason, black panthers are more likely to succeed in darker habitats. To match this theory, most black panthers are found in dense habitats such as jungles.

Jungles are wet, messy, jumbled places and they mirror the unkept and unknown part of our unconscious. Black panther spirit animal is adept at navigating the unconscious, hidden parts of ourselves. She ventures into the unknown, comfortable with the darkness. Black panther spirit animal understands that the jungle is fraught with danger and rich with resources. The shadow is both good and bad.

Black panther symbolism is not only about traveling into our own darkness, but also the mystery of the universe. Both jaguars and leopards are solitary animals, and black panther spirit animal lends us the courage to venture into the unknown alone.

The mystery of the universe is called the “void”. This is the darkness of the womb, the place of pure potential creation, and both the end and beginning of all things. The void is a place beyond the five senses where we must venture on faith alone. Black panther animal totem is our guide along the way.

In the book Medicine Cards, black panther symbolism is explained as “embracing the unknown”. This is an excellent hallmark to remember.

Black panther symbolism is associated with the new moon in particular. Her energy is strongest when we face the dark side of the moon during the day and have no moon at night. The absence of moonlight makes black panther less visible and a superior huntress. The new moon is a time of both death and rebirth, when we stand at the threshold looking back at what was and looking ahead at what’s come. Neither are certain for this brief window in time. What was is no more and what’s to be is not yet born. Faith is a hallmark of black panther symbolism.

The moon is strongly associated with the feminine as is the jungle and darkness, thus the black panther is said to carry the energy of the feminine principles of receptivity and intuition. Now is not the time for figuring things out or striking out, but for both turning inward to your soul and opening up to the Divine.

In Ted Andrews’s Animal Speak, he shares that “To the Tucano Indians of the Amazon… the black panther was the god of darkness and could cause eclipses by swallowing the sun”. The brilliance of this teaching is that solar eclipses only occur during a new moon and  black panther spirit animal’s height of power occurs during the new moon. New moons are often seen as new beginnings, a rebirth. Most astrologers highlight the point that solar eclipses are amplified new moons, setting the stage for what’s to come for the next six months.

However, in leaping forward, we miss the medicine of black panther which is aligned with the moment of the new moon more than what’s to come. Nights of entire darkness during any new moon and also that moment when the moon and sun are dark during a solar eclipse are chilling experiences for us. We like the light and fear the darkness, but if we could manage to stay with the fear long enough much would be revealed to us.

Even though the sun is mostly covered by the moon during a solar eclipse we still cannot look at it without risking eye damage. If we look at a bright light we go blind and see darkness. Many mystics teach that most of us could not bear to look directly at God. Great saints and gurus spent decades preparing to handle just a glimpse of The One.

Black panther meaning is an opportunity to encounter the Divine through the mysteries of God. We fear the dark side of the moon, but we are merely looking at the other side of the same celestial body. Life emerges from death and death from life. They are opposite sides of the same coin. Black panther leads us into the untapped creative potential of this truth.

Stacey Couch, Certified Shamanic Practitioner, works as a publicist and journalist for Mother Nature and is the author of Gracious Wild: A Shamanic Journey with Hawks. She empowers people with the ability to explore life’s big questions by calling on nature, story and synchronicity as a source for guidance and healing. With over ten years of experience in the field of shamanism and thirteen years experience working with wildlife and rescue animals, Stacey has a unique blend of rational and mystical perspective that makes the world of shamanism easily accessible to others. She values mindfulness, wonder, and compassion in her daily spiritual practice. Learn More about Stacey.