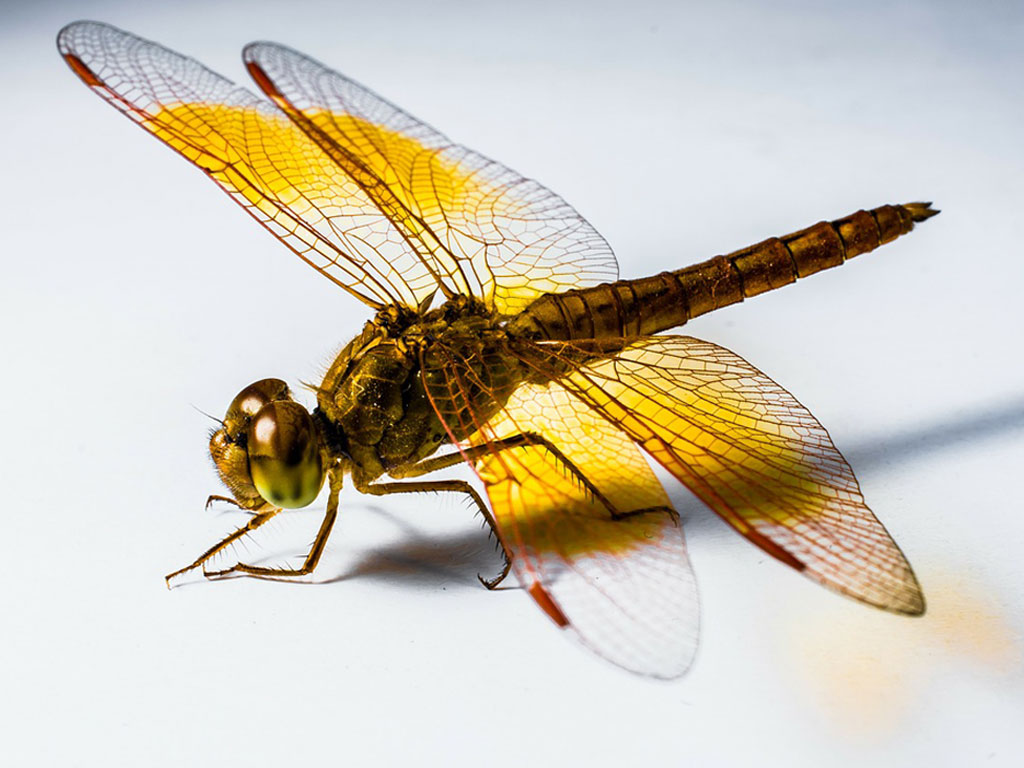 Dragonfly symbology is intimately linked with the ability to move quickly and swiftly in all directions. Like hummingbird, dragonfly is an agile flyer that can hover, go up or down, forward or backward, and left or right. This speaks of an ability to encompass all seven directions of the medicine wheel. He also has four different styles of flight from gliding to speeding through the air.

When studying the meaning of dragonfly, be sure to examine your own agility. Are you able to adjust the speed and direction with which you are moving through life? We can sometimes get stuck going forward 100 miles an hour only to find ourselves laid out flat with a cold regretting past decisions. Dragonfly spirit animal reminds us to experiment with different paces and directions as we navigate through life.

Dragonfly gets his name after, yes, the myth of dragons. When you learn that a prehistoric dragonfly once existed that had a wingspan of over 2 feet wide, you may start to imagine that dragonfly is the real-life counterpart of dragon energy.

Both as a young nymph in the water and winged adult, dragonfly is a fierce, ruthless predator that is known for eating more than a fifth of his own body weight in one day. He will sometimes kill more than he needs to eat. He grabs prey on the wing with his strong jaws and carries it with his legs. Dragonfly also staunchly defends his territory at a given pond. Dragonfly symbolism is about hunting out what you need and/or want and being a brave and courageous warrior in the process.

Some people shy away or have a negative connotation with predatory nature, but it is just as needed as any other way of the natural world. Without the help of dragonfly we would have an explosion of small insects like mosquitos. Dragonfly helps control insect populations that are overabundant. He teaches us that there is more than enough for everyone. Be brave, venture forth, and take the dragon’s treasure as your own.

Dragonfly is often associated with transformation because his life cycle includes metamorphosis, but what many people don’t realize is that the dragonfly undergoes what is called “incomplete metamorphosis”. This means that he looks mostly the same throughout his entire life. The dragonfly starts out as a waterborne nymph and undergoes multiple molts (from 6 to over 12 molts depending on the species) out of one body size into the next. He literally crawls out of the old skin, known as his exoskeleton, already in his new skin. His final molt is into a more colorful, winged version of himself. Insects that undergo “complete metamorphosis”, such as butterflies, look completely different between larval and adult stages and must spend cocoon time as a pupa to make the one big transformation.

Incomplete metamorphosis of the dragonfly nymph shows us that transformation doesn’t have to happen in one big, grandiose gesture, but can be unveiled in a number of small shifts. The lack of need for a cocoon stage shows that we don’t always have a rest or time to consider changes in our lives and that’s okay. Now is the time to simply move ahead into the new. Like the dragonfly, you will emerge in your new skin ready for the world.

The change from a swimming, brown, wingless nymph to a winged, airborne, iridescent beauty is quite dramatic in dragonfly. The adult dragonfly emerges from the back of his own head. Dragonfly symbolism therefore relates to an intellectual (and likely spiritual) awakening. A birth to not only new ideas, but a more evolved way of thinking altogether comes with dragonfly symbolism. He goes from living and breathing in water to instead breathing and flying in the air. This drastic switch from the emotional realms of water to the intellectual realm of air shows how dragonfly symbolism is about shifting from emotion to thought and higher ideals.

Dragonfly spends most of his life as a nymph in the water, depending on the species and the conditions, a few months to many years. Dragonfly is only a winged adult for a short period of time.  This shows how our maturity may happen under the surface and unrecognized as we grow our capacity to handle the emotions of life.

As a nymph, dragonfly breaths through gills in his rectum. Although not poetic, this interesting adaptation allows him to expel air out his anus as a form of jet propulsion. The anus is symbolic of the way we release what is no longer needed. Now may be a good time to let out a big sigh of release and let go of what is stressful and unproductive in your life. A quick release can propel you forward.

A Bit on Intimacy

Dragonfly mates in a unique posture called the “heart” where the male grabs the head of the female with his tail and she places her tail just below his head. This speaks of a requirement for love and emotional intimacy before physical partnering occurs. This could be a need to get to know a business partner’s character before signing a deal and doesn’t apply solely to romantic relationships.

Dragonfly symbolism is synonymous with illusion. The combination of the dazzling way dragonfly’s body reflects light and the transparent beauty of his wings contribute largely to this association. His “iridescent coloring – created by the play of refracted light – teaches us the value of looking at life from different angles. From each new perspective, the world takes on a different spectrum of colors, reminding us of the illusive nature of reality.” (from Heart of the Ark Cards).

As we mature from watery creatures ruled by our emotions to more enlightened beings we start to take in the universal truth about the nature of reality. The majority of what we thought was “real” is just illusion. In the great teachings of Buddha we learn to not get attached to the spectacle. It is not until the end of dragonfly’s life as a winged insect that he takes on iridescence. This teaches us that it takes maturity and thoughtfulness to embody all the colors of life.

How are you handling your emotions? Are you able to emerge from the illusion and take in the spectrum of life? Remember that the meaning of dragonfly is not just about rising above or shutting off emotions. He remains always over water and the eggs of his offspring are implanted under the water’s surface. The long experience gained in the emotional realms are the foundation for growth.