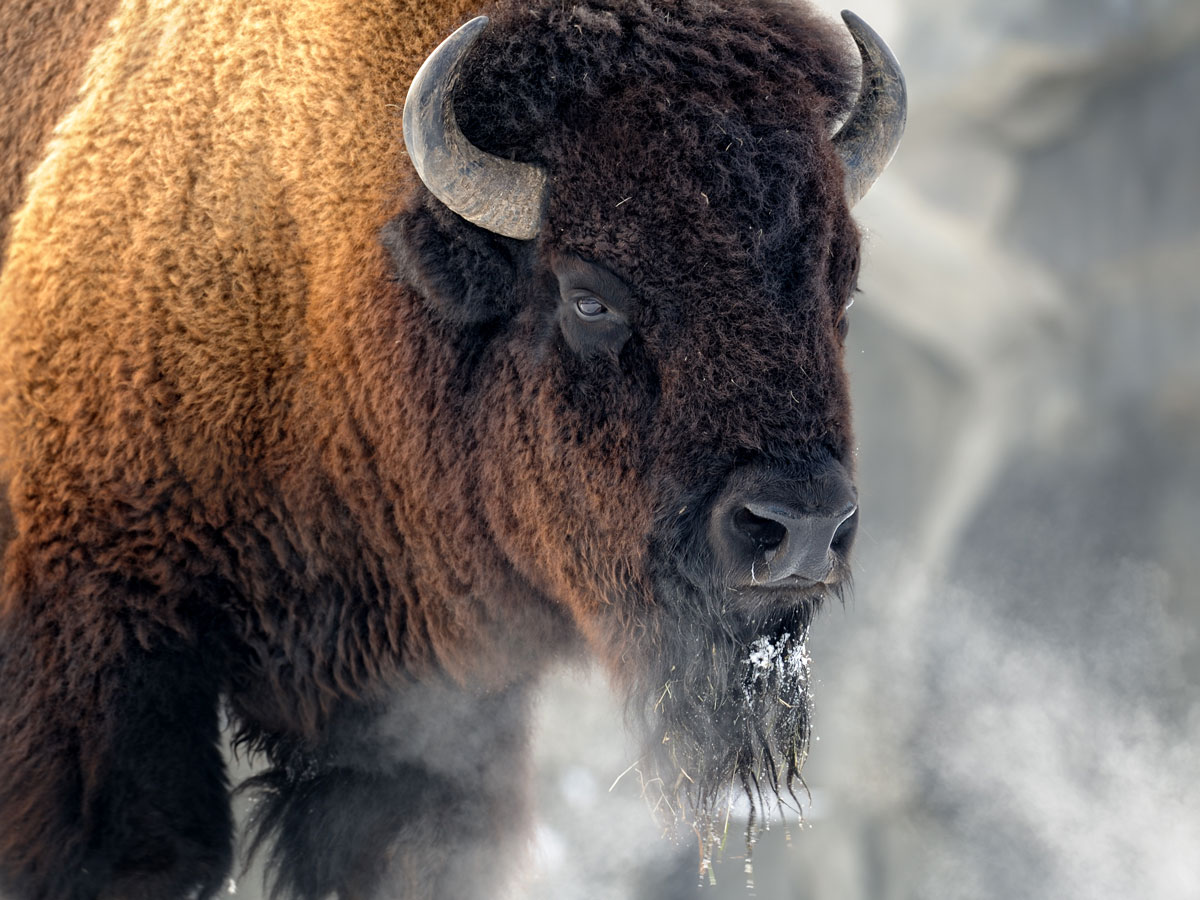 In the midst of the lowing of the herd, he takes a break from munching grass and saunters over to a bare patch of earth. The sun is rising and his breath is made visible by the steam that drifts from his nostrils like tendrils of smoke. His head sways ever so slightly as he walks, the bulk of his shoulders clearing the way as members of the herd part to allow passage. At the wallow he comes down to his front knees and the rest of his mass falls with a “thud” into the dirt. He rolls to one side pushing his entire body into the depression stirring up dust and frost at once. His grunts join into the contended conversation of the herd.

The buffalo spirit animal is a precious beast for so many reasons, some commonly known and others less so. What we most often call a “buffalo” is officially called the “American Bison”. There is only one other species of bison on earth, the European Bison. Both are considered ecologically extinct and the European Bison has come even closer than the American Bison to complete extinction. Bison are more closely related to cows than to actual buffalo, but in answering the question “what does bison mean?” this exploration will use the names interchangeably.

Any study of North American history includes the grievous chapter on the decimation of the buffalo. In less than 70 years, the population of American Bison was brought from a reported 30-60 million to less than a mere 2,000 in 1889. This mass extermination was a gluttonous move by European settlers to win the west, a deliberate tactic to deprive the Native people of their livelihood. A number of Native Americans tribes relied entirely on the buffalo for food, clothing, tools, shelter, and more. They used every part of the buffalo in their daily life. Buffalo symbolism is directly tied to the idea of abundance because they literally offered an abundance of goods to the people that hunted them.

Through various efforts, the buffalo has recovered to somewhere between 500,000 to 1 million individuals today, but the species is considered ecologically extinct because they no longer are able to range their native habitat like they evolved to do. They are kept in small parks and buffalo that wander out of the boundaries are shot. Did you know that wild bison are routinely rounded up and excess members are sent to slaughter? The plight of the buffalo today is strikingly similar to that of the wild mustang. The meaning of buffalo is closely linked to our ideals of freedom and how that freedom actually looks in practice.

Do you feel as if you have enough room to roam? Is someone or something curbing your range? Buffalo spirit animals roam the space they are given, but can be tough on fences. If you find yourself testing the boundaries of a relationship or circumstance, it may be time to focus on an area of your life where you have space to take more liberties.

Bison are known as a “keystone” species in that they have an impact on their environment that is disproportionately larger relative to their numbers. They affect the distribution of grasses, the way fire moves throughout the prairie, the cycle of nutrients, and the composition of grass and wildflower species. Their hooves aerate the soil which helps the plants better uptake air and oxygen for faster growth. Buffalo wallows are bare patches of dirt where they frequently roll. These round holes create vernal pools during spring rains which serve as mini oasis for wetland species of plants. The wallows remain in undeveloped areas for up to 125 years after buffalo have been removed from the land.

Ferruginous hawks used to create their nests entirely out of bison bone, fur, and dung. Prairie dogs preferred to colonize in areas grazed by buffalo because they could spot predators better in the shorter grasses. A whole host of animals from black-footed ferrets to burrowing owls to foxes rely on prairie dogs as a food source.

Bison not only provided a valuable source of sustenance for grizzly bears and wolves, but also for scavengers such as coyotes, eagles, hawks, and vultures. When their carcasses were left to rot, they would add enough nitrogen to the soil to make it 2-3 times more rich than the surrounding grassland. Even their urine mobilized nitrogen quicker than natural processes and added fertilizer quickly into the ecosystem.

Regardless of the fact that the buffalo is a key player in grassland ecosystems, they are also a part of a herd. Like any herd animal they find safety in numbers and their habits and days are affected by the movement of the herd. Buffalo spirit animal is a reminder that you are at once a critical component of the world AND just a member of the herd. It is important not to get too overblown in your own importance, and to plainly be yourself. Contributing to and participating in the whole is key.

By simply doing what they do, buffalo create variety and abundance wherever they go. Are you able to offer the same gift to the world? If we all could aspire to be so generous, the world would be a better place. Consider if your actions are contributing to the whole are taking from it. How can you tip the scales so that you are a source of grace for others while still standing in your strength?

Buffalo are incredibly powerful animals that weight over 2,000 pounds. They can run up to 35 miles per hour and cross rivers over a half a mile wide. They easily lead barbed wire fences. In the winter they survive by pushing the snow from the grass using their massive heads. Built to survive warm summers and cold winters, they are at home in the stark, open landscape of the grasslands. They will fend off predators using their bulk and horns.

Buffalo spirit animals can lend us the strength to stand our ground, but they remind us not to crash around like a bull in a china shop. Only 5-10% of challenges between bulls lead to actual fights. The bulls compete for females by butting heads. They have special boney struts that reinforce their inner and outer skull as well as a thick matt of hair on their forehead to protect them from the force of the blows. This reminds us of the benefit of being “thick headed”. Sometimes it is necessary to know your truth and not give in to the shoves of others. Do be mindful although, because bulls easily gore their opponents by slipping off to the side. Remember that going straight on may leave you vulnerable.

Buffalo symbolism is also linked to giving thanks much in the same way as turkey spirit animal. When White Buffalo Calf Woman came to the Lakota people she did so with the teaching of right action and right prayer. Giving thanks was a part of her teaching. When considering the meaning of buffalo, remember that you are both the buffalo and the ecosystem that profits from their action. You have the opportunity to spread abundance wherever you go as long as you stay true to who you are AND now is the time to give thanks for the myriad of ways that the Divine brings abundance into your life.

Just now scientists are beginning to understand the immense impact that buffalo had on the vast grasslands that once covered the North American continent. They are just now seeing the connections between buffalo and their environment. All along, people who lived off the land and off the flesh of the buffalo understood that all was connected. They honored these connections and with an deeper understanding of the medicine of buffalo spirit animal so can we.

Stacey L. L. Couch, Certified Shamanic Practitioner, works as a publicist and journalist for Mother Nature and is the author of Gracious Wild: A Shamanic Journey with Hawks. She empowers people with the ability to explore life’s big questions by calling on nature, story and synchronicity as a source for guidance and healing. With over ten years of experience in the field of shamanism and thirteen years experience working with wildlife and rescue animals, Stacey has a unique blend of rational and mystical perspective that makes the world of shamanism easily accessible to others. She values mindfulness, wonder, and compassion in her daily spiritual practice. Learn More about Stacey.