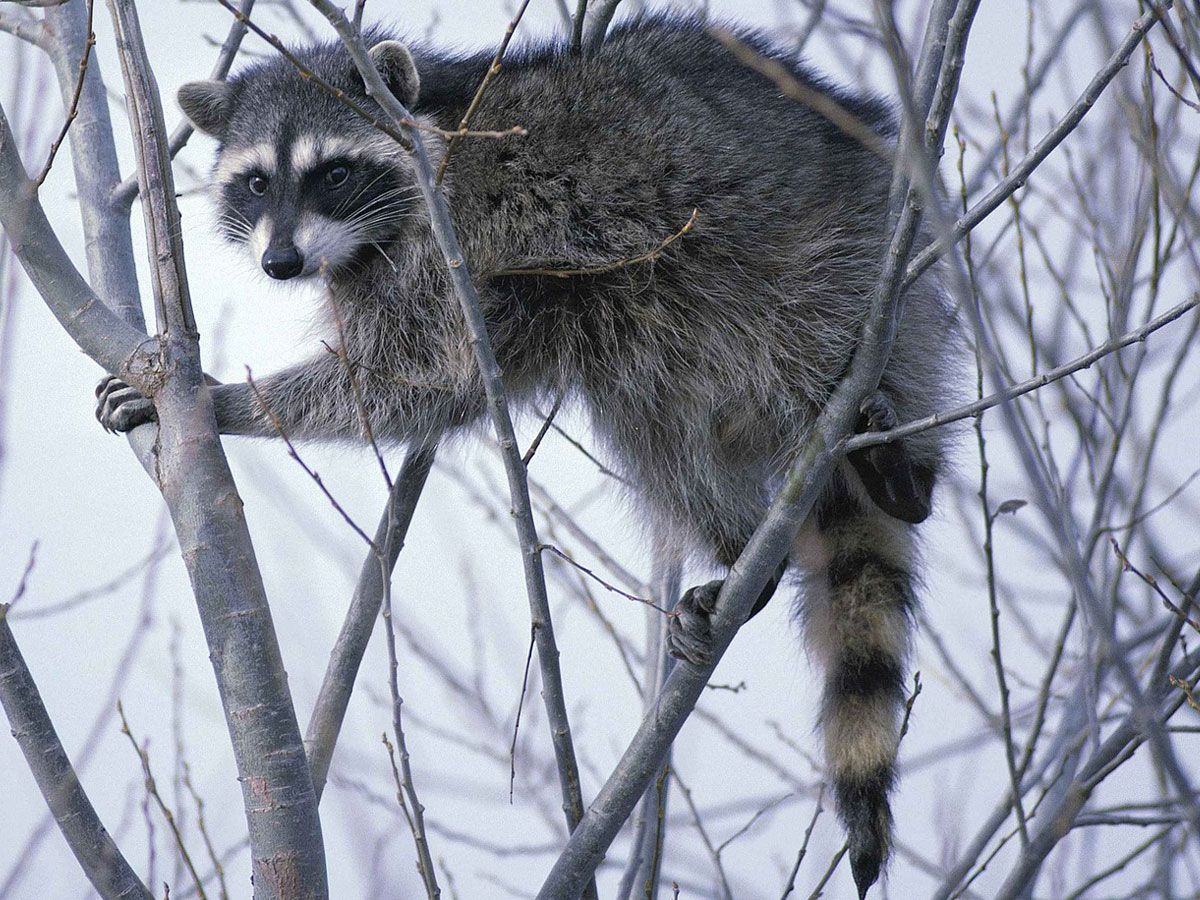 He sneaks about in the darkness looking for the slightest opportunity. Any tidbit hidden in a crevasse becomes a jewel in his hands. He is at home in the city or the country. No matter where we find raccoon spirit animal we will find a dose of both good humor and good conscience. Who thought such a common animal could bring such luck?

These little bandits are ubiquitous across the whole of the North American continent. Found in swamps and marshes, on the banks of lakes, ponds, rivers and streams, in the vastness of the desert and prairie, in the seclusion of forests, on the tops of mountains and the bottom of canyons, and in cities and suburbs, raccoons have adapted to any environment. Raccoons are happy to den anywhere from a hole in the ground to a cubby in an attic. They are the quintessential omnivore and will eat anything, plant, insect, trash, or animal, that they can get their little paws on.

Raccoon spirit animal brings the message that you have the occasion to be at home and find sustenance, even wealth, wherever you are. He does not cover a wide range, but he utilizes and explores every nook and cranny of his territory. Raccoon symbolism is all about being flexible with what’s available.

Raccoon is marked from birth with that characteristic black eye-mask. He has a reputation for being a trickster and nighttime bandit in disguise.

Raccoon spirit animal teaches us about the nuances of disguise and what we do when we think we’ll go unrecognized. In movies, cartoons, and drawings, the archetype of the thief is pictured so often with a black scarf with two holes for eyes. In many legends, raccoon is busy stealing things under the cover of night or out from under the noses of blind people. Raccoon symbolism is closely linked with what we might be blind to or what others are blind to in us.

When we wear a mask or watch a character in a movie wear a mask there is the unwritten understanding that the wearer is attempting to escape the consequences of their actions. Even if the thief is robbing from the rich to give to the poor like Robin Hood (i.e. stealing for “good”) they still have to hide and evade because they are operating outside the law.

In the end, raccoons in legends are always caught and marked as thieves as evidenced by their face mask and ringed tail. In our world, we may escape without any outer consequences, but we will still have the inner doubt that plagues us. What if someone did find out?

It is worth evaluating how you use a disguise to get away with stealing. When you go to pay for a service and remember that you didn’t bring enough cash along, do you pose as innocent to convince the other person to take less money? Raccoons have the sweetest, charming little faces and they aren’t above playing the innocent to get away with something they want.

There is a splash of white all around the edges of the black eye mask of the raccoon. This can point to an inherent goodness shining out, a need to be recognized for the light we are in the world. Sometimes the masks we put on aren’t necessary and can be born of a shame that requests healing.

Raccoon has lightening quick paws to grab aquatic creatures, pluck mice and insects from hiding places, and invade bird nests to take tasty eggs. He is known for raiding campsites and trashcans when everyone is sleeping.

We all steal from time to time, be it something as simple as a pen or as invisible as the attention of another. Stealing energy or time from another person, or even stealing from their reputation by mentioning their name, wears away at the fabric of who we are over time. Raccoon spirit animal teaches us how to notice the telltale signs in ourselves of when we are snatching up little bits that might not be ours. He helps us come further into integrity.

This isn’t about looking at the ugly side of your nature and disliking what you see, not at all. It’s about developing a mature conscience. An immature conscience depends on the opinions of others or even the laws of society. Both of these conventions can be mischievously fun to break. A mature conscience taps into the value of one’s motives and understands whether we mean to do harm or do kindness. It’s that simple. When we come from a place of valuing kindness, mischief falls away.

Some questions to ask yourself when contemplating raccoon symbolism:

Mircea Eliade, a well-known scholar who studied shamanic practices around the globe, talks about the trickster as a character that plays all sorts of jokes. He makes fun of others and is made fun of. Oftentimes in myths, the trickster is actually a demigod in disguise come to bestow blessings on the object of his high jinks.

We think we know the path and set out on it the way we’ve decided is best. Then the trickster comes and bumps us off our road. This is the flat tire when you’re running late or the hard drive crash right as you type the last word of an important document. We learn to laugh with a sarcastic, “ha, ha” at the trickster’s joke, but often we are at the very least irritated by the interruption or at worse absolutely derailed by the catastrophe.

Once it’s all over we find we are better off or we are brought to a gift we never expected.

In the legends, raccoon cons wolf into freezing his tail into the ice and deceives three blind women into breaking their favorite pottery. He is among the ranks in the animal world of other tricksters such as coyote, raven, and fox.

Thus, raccoon spirit animal has the potential to bring you great teaching and wealth, but it will likely not happen in the way you anticipate. When working with raccoon it is a good idea to keep a loose sense of plans.

Raccoon’s sense of touch is his most heightened of senses and the majority of the focus is in his front paws. He has “hyper-sensitive’ hands that have long whiskers known as “vibrissae” that assist with identifying objects before actually touching them. Nearly two-thirds of his portion of the cerebral cortex responsible for sensory perception is dedicated to the processing of tactile impulses. He thinks a lot about what he feels.

Raccoon can adeptly open jars, untie knots and turn door handles. His five toed front hand closely resembles ours. His lack of an opposable thumb doesn’t stop him from attempting to enter our world. Raccoon symbolism is about how we choose to handle situations. Will we “grasp” quickly for what we want or will we take the time to “wash our hands” of our wrongdoing before enjoying the incredible opportunity around us?

Working with our conscience is all about how we handle situations. Raccoon spirit animal is most definitely here to help.