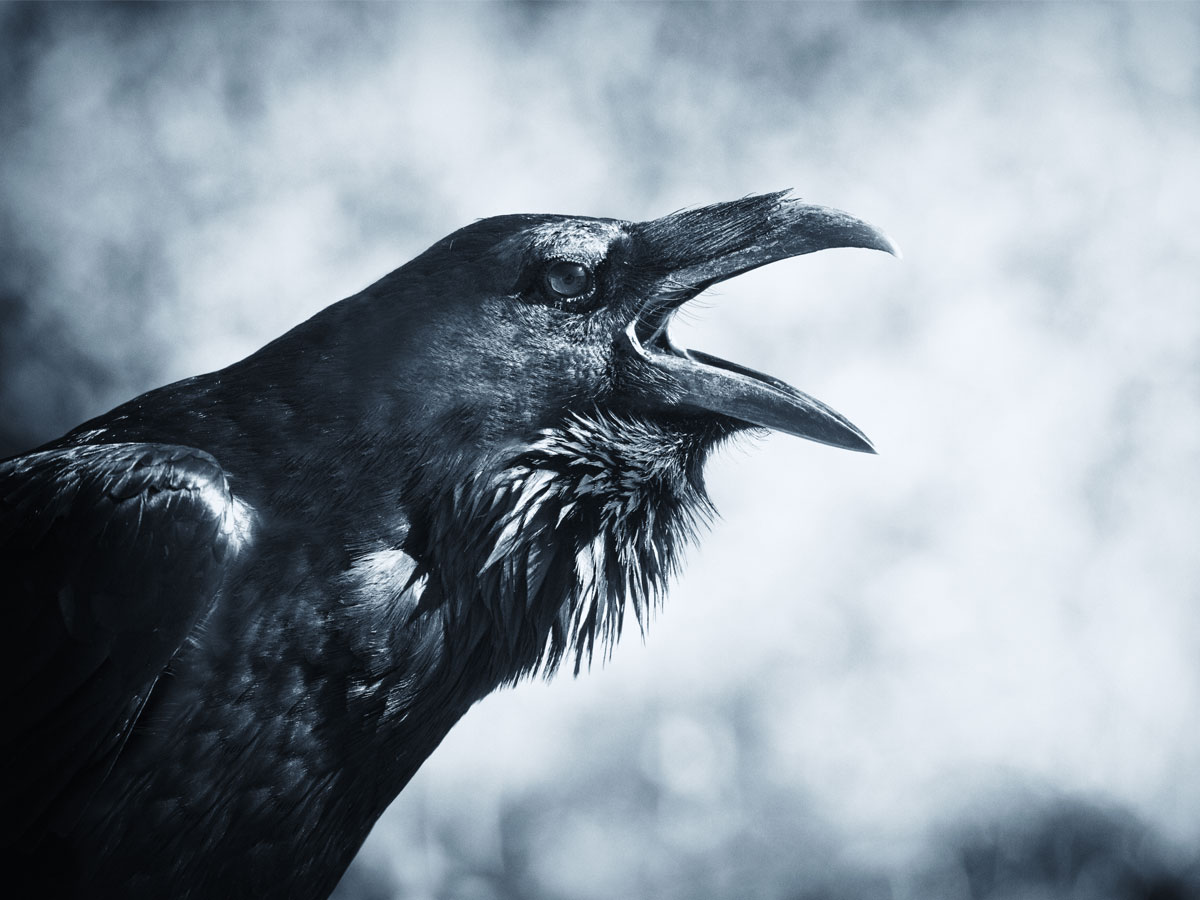 This beautiful black creature brushes mountainsides with wingtips. His black eyes drink in landscapes as subtle breezes hold him aloft. Raven’s undeniable determination is audible in the whir of his heavy wingbeats. On occasion he joins with a troop of two or three others to cackle at the wind and tease the beasts on the ground below. His voice cuts through the forest’s silence. It echoes like an inside-out gurgle of water down a seep-hole. His call is an invitation to other worlds. Is he calling those worlds forth? Or is he calling us to those worlds? This is for raven to know. He is incredibly clever. We admire him for his ability to use tools and solve puzzles. The trick is we haven’t even begun to solve the puzzles he creates.

Bringer of hidden truths, Raven spirit animal wanders the world over probing mysteries. He contemplates the unknown as the ravens named Hugin (“Thought”) and Munin (“Memory”) – the Norse god Odin’s trusted advisers. Odin is the god of wisdom and seeking. His wisdom is owed to the help of two intelligent ravens.

Ravens help us discover the the hidden treasures within our own mysteries, lighting up the unconscious. An Inuit tale tells of a raven tricking his way into a whale’s belly where he meets the soul of the whale and eventually feasts on the rich oil inside the whale. He carries two fire sticks with him that he goes to great pains to retain. Raven’s confidence in his ability to light up the dark helps us navigate the unfamiliar in life and in ourselves.

In other myths, raven is known for birthing the human race by coaxing the first humans out of clam shells. For us, raven spirit animal draws us out of our own protective shells and guides us through the mysterious unknown “out there”. He is an opener of doors for the mind and soul.

Raven spirit animal’s intelligence was passed down to humans when he taught people how to sow seeds and hunt. He is known in the mundane world for his ability to outwit other animals, use tools, and use complex communication. If anyone is going to lead you into cloaked and uncharted territory, cunning raven is a good bet.

Raven is depicted as a hero god who either created or helped create the world in stories of the Northwest Coast of North America. On the other hand, we find associations with death in Celtic and European folklore. He is associated with the decimated battlefield littered with the corpses he feeds on. Comfortable with death and the underworld, raven spirit animal helps us enter into that Great Unknown during important life transitions.

Mythology surrounding raven shows him providing aid and causing trouble at the same time. He’s a trickster who causes hardship for humans and other creatures by convincing them to do foolish things. He’s just as likely to steal the light as bring it. However, raven’s conniving can also result in him putting things right again. An example of this is the Athabaskan myth of raven stealing the sun and moon back from a greedy chief who hid them away. Trickster energy can change the course of things for good and grant us valuable wisdom.

Have you ever had something go terribly wrong and later been grateful for the detour? In looking back do you now realize that there was a Divine hand in the event? Did what you learn in this experience make you all the richer? Or did the redirect take you to place better than what you could have imagined?

Remember when considering raven spirit animal, that you aren’t looking for ways he’ll bring you material wealth or outstanding recognition. Raven helps you know deep mysteries that help you breathe into the infinite.

Ravens have wedge shaped tails and long fingers on the ends of their wings. This is how even the novice can tell them apart from their close cousins, crows. Crows have square tails and rounded wingtips. It is important to know one from the other because crows carry aspects of community, civilization, and play. They understand more of what it means to be in society.
(View article on Crow Symbolism here)

Ravens, on the other hand, are closer to the heavens, to solitude, and to wilderness. They keep company with clouds, hawks, bears, coyotes, wolves, and wolverines. They scavenge carcasses of big game. Raven spirit animals relate to what we experience when we spend time alone contemplating the big game, the big questions in life, and how we relate to this mystery.

So much is shared about this bird that engulfs mystery with his black coat of feathers. Jamie Sams and David Carson write in Medicine Cards: “If you have chosen Raven, magic is in the air. Do not try to figure it out; you cannot. It is the power of the unknown at work, and something special is about to happen. The deeper mystery, however, is how you will respond to the sparkling synchronicity of this alchemical moment.”

Ravens often come to assist me with ceremonies such as weddings and land blessings. I believe they are responding to the opening of the veil that occurs when we call in the holy. One particularly poignant raven encounter happened at a wedding ceremony I conducted for friends. As I was setting space and asking the guests to circle around the couple, two ravens flew directly overhead right through the center of the circle.

Ceremony involves working with what we call magic. Magic is simply an unseen force that adds power to a setting and it relies on the power of illusion. When magic is in the air surprising omens appear and events outside the laws of nature seem to take place.

Raven spirit animal, like a magician, weaves intricate illusions that causes us to see unbelievable things. When you have an experience you don’t think anyone else will believe, raven is often afoot. He helps shatter our preconceptions and shows us new possibilities. Raven spirit animal captivates us with tricks and causes us to question everything we once thought was certain.

Power is never created or lost. When you direct power to create the dazzling illusion, you’ll find that another area of your life seems to lose power or attraction. There is nothing wrong with this situation, just something to be mindful of.

The part of your life that now seems mind-numbingly boring hasn’t changed, but the balance has shifted. Give the illusion some time to fade away and things will seem less uneven. Ultimately, once raven comes to visit you will never be the same. Adjusting to this new world view will be your new task.

The Flight into the Dark

The path to enlightenment is the same road into the dark. Our ability to hold awareness allows us to persevere rather than tumble into suffering.

Can we tell if the darkness is our own shadow or if it the vast void stretched out before us? When does our shadow merge with the void?

How do we choose the unknown over our fear? Raven has the skill to navigate these currents, to steer through this illusory black hole, and come out more robust than before.

The next time you notice a raven in your field of view, pause to watch what he’s up to. Remember you can learn much about the illusion and the mystery of existence. If you’re luckily enough to notice and engage, raven spirit animal just might offer you some flashing insights.

For more information on raven symbolism and the spiritual path, read my article on the fairytale of “The Seven Ravens”.