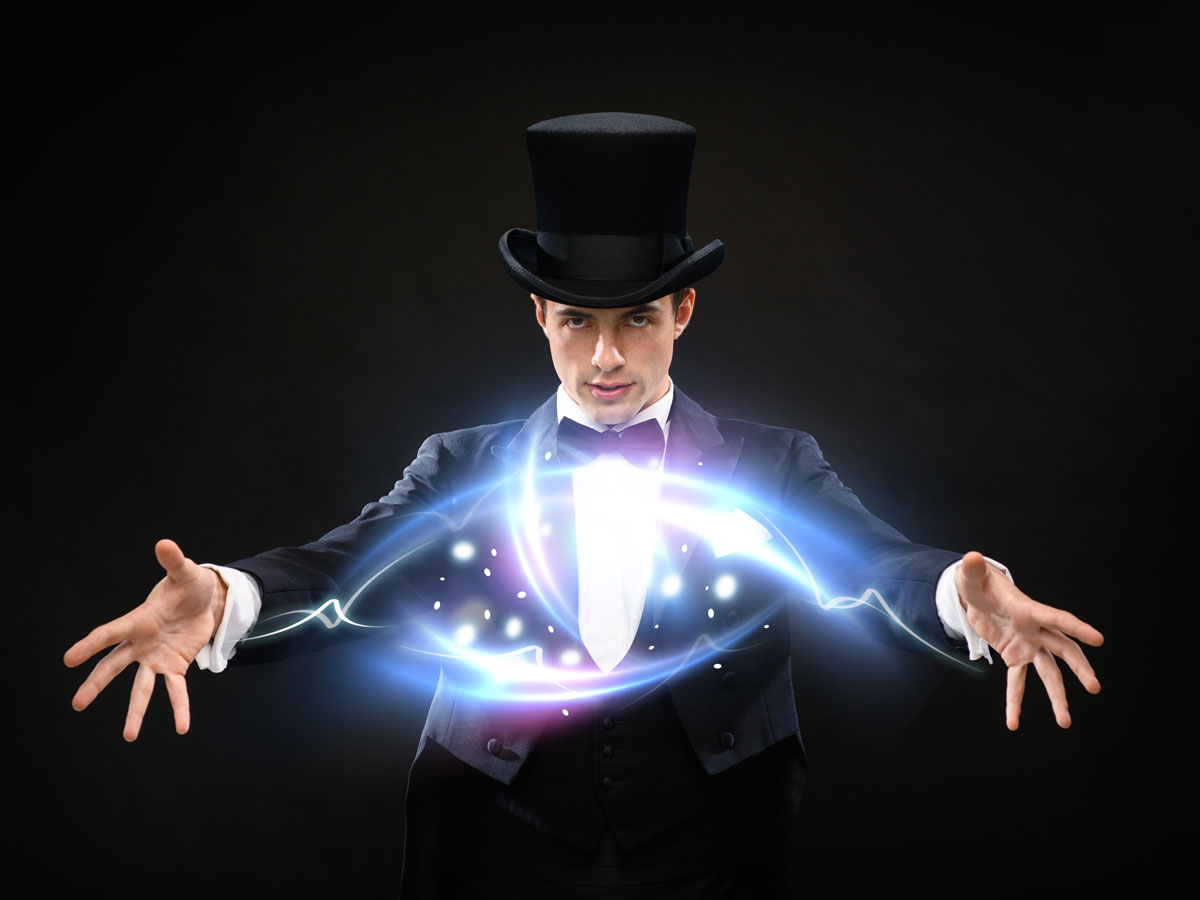 The magician archetype is expressed in the wizard, witch, sorcerer, alchemist, and spell-caster. The magician is the carrier of secret knowledge. He is initiated specifically to contain, channel and direct power. He knows the mystical laws and possesses mastery over nature. The magician and wizard are geniuses of negotiating power.

Any true specialist in a field may be drawing on the power of the magician. Examples are doctors, therapists, stockbrokers, lawyers, and healers. Magicians are all around us in the every day.

The magician archetype is able to change the form, energy or appearance of something (or someone) in impossible, mind bending ways. A magical makeover turns a geek into a beauty queen. A boy grows into a man overnight. A criminal is made to look innocent.

This transformation requires that the magician know and then bend or break the laws of nature. One of the differences between the magician and wizard is that the magician creates an illusion that lasts for a short amount of time. (Think of Cinderella needing to get home by midnight.)

The wizard is more skilled, further initiated and is able to cast spells that truly transform a situation. In essence, the wizard is a wiser, more mature magician who’s learned to manage great amounts of power. The wizard has also earned his skill through intense trials.

The Price and Bargains

Magic speeds up time and makes a project easier, but it still takes the same amount of energy as if you’d done it “the hard way”. The magician simply knows how to find, channel and release the energy in a way that circumvents the laws of time and space.

Still, the energy for a spell has to come from somewhere. If it would take you two years and tens of thousands of calories of energy to accomplish a task, that exact amount of energy has to be directed to complete the spell.

The magician archetype finds power in nature in plants, minerals, and the land itself. He also stores his power over time, usually in an object. Draining power from living beings is another source of energy. Suffice it to say the ethics of this method are often questionable or non-existent.

In this day and age, we use money or take out a loan to pay magicians. Historically, magicians asked for the promise of a first born child or the service of a maiden in twenty years time. There is always a price.

Remember to look for the hidden price of your spell. Is the magician archetype asking for your attention, adoration, status, or personal power? If you’re working the magic, what are your hidden costs?

In the same way a fifth grader is not ready for calculus, we cannot trust the novitiate magician with powerful spells. In Harry Potter books we see numerous examples of spells cast by Hogwarts students wrecking havoc.

The magician must invest years studying the workings of power. In mythology, apprentices die or are wounded when they attempt magic beyond their skill. In life, students lose face, experience financial ruin, and plunge into failure when they try to engage a power they don’t fully understand. Picture the surgeon who attempts a risky surgery he doesn’t have the training or qualifications for. The patient dies on the operating table and the surgeon loses his ability to practice medicine.

The path of the magician archetype involves careful study, apprenticeship with a master, and humble restraint. The level of power the novitiate is allowed to negotiate increases gradually over time. Once he proves he can master one level of power, he graduates to the next.

Working with the Magician Archetype

Think of who you hire to help you get something done faster and with less effort: physical therapists, healers, animal trainers, general contractors, marketers, and accountants – really any expert. You are asking this person to be a magician.

What would likely take you weeks, months or years to accomplish, you hope the magician accomplishes in a fraction of the time. You expect this person to do the bulk of the heavy lifting for you.

There’s nothing wrong with hiring a magician. It’s simply dangerous to do so unconsciously. It sets up hidden expectations and exposes you to a disempowering situation.

When soliciting the help of the magician archetype it’s important to follow these guidelines. If you are considering being a magician for others, all of this applies in the inverse.

In the shadow, the magician archetype obstructs rather than helps. He withholds information or only gives it in small doses. The shadow magician favors doomsday scenarios to control using fear. He maneuvers to be in charge of decisions. The black sorcerer works on his own behalf to gain wealth and status rather than bolstering others. He leaves his prey weaker and poorer.

The Light Side of the Magician

In the light aspect, the magician can be an invaluable ally. The magician provides the belief that anything is possible. This offers hope and inspiration to help you break free of limitation or hardship. Great leaps in consciousness and expression are accessible in the company of the magician. You can attain goals beyond your wildest dreams.

When done well and with virtue the magician’s spell can offer you a lifesaving gift. Talented wizards are rare indeed, so choose your helper wisely. And if you happen to be a magician yourself, put one foot in front of the other along the path with integrity and humility as your guides.

This book has an in depth chapter on the magician that is very enlightening:
King, Warrior, Magician, Lover: Rediscovering the Archetypes of the Mature Masculine

Want to know if the magician or wizard is one of your archetypes? Click here to schedule an Archetypal Consulting Session