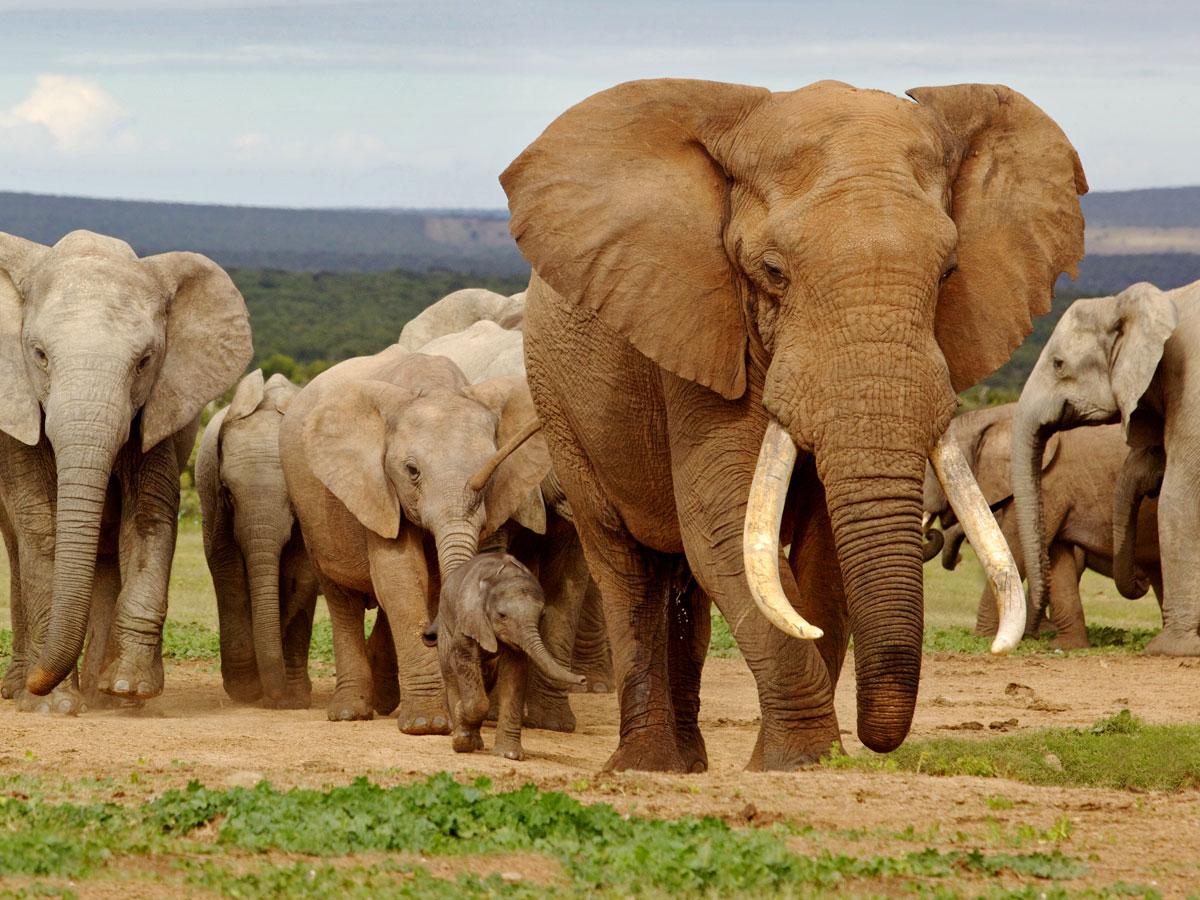 Elephant society is female dominated, what is otherwise known as a matriarchy. Each herd is lead by an elder female who is at once the older sister, the eldest aunt, the mother, and the grandmother. She travels with her sisters and all of their offspring. There is a deep sense of community among elephants and they mourn the passing of their loved ones. Mature males travel alone or in lose bachelor groups. They only join the females during mating.

Elephant symbolism speaks of the wisdom in the trinity of maiden, mother and crone. By encompassing all generations of females and venerating the matriarch, feminine wisdom is rich in the world of elephants. Elephants are known for their altruistic and compassionate treatment of each other. Whenever you’re feeling the need for empathy and nurturance, elephant spirit animal can help you come home.

Elephants have the ability to hear low frequency sounds, known as infrasonic sounds, better than any other animal we’ve tested.  They can also communicate over long distances (at least 7 km and possibly up to 70 km) with their infrasonic rumble calls.  We cannot hear the sounds they make, but we can feel the vibration of the rumbles. Infrasonic sounds travel through air farther than higher frequency sounds, and this gives elephants the ability to coordinate their movements over long distances.

The law of vibration states that everything in our world is actually moving, vibrating at a molecular level. It is the rate of this vibration that determines what form the molecules will take. In a moment of Divine revelation, we have the opportunity to feel the vibration of all life. This experience is completely breathtaking. Anyone who’s fully entered the law of vibration is irrevocably changed.

Elephant symbolism brings us into contact with this universal law and opens us up to a life of service of the whole. Once you understand the grandeur of the world through the law of vibration you can’t help but come into service of it.

There is no evidence of territoriality in elephants and this may be because the family herds are in continual contact with each other over long range. In talking, they avoid going to the same area to graze when resources are limited. Elephant symbolism teaches us how to take our neighbors (both literal and figurative) into account when making decisions about how to obtain and utilize resources. So many of our decisions are short sighted and it is time we take into consideration everyone that is affected by what we do. With the help of elephant spirit animal, we have the opportunity to truly live our lives in a more “global” way not only taking our fellow humans into account but also the earth and all her children.

Studies have found that elephants call more at night when a temperature inversion makes their sounds travel farther. This shows an acute awareness of the density of air. The element of air is associated with our thoughts. Elephant symbolism brings us into knowing that even our thoughts have a frequency, a vibration, that affects everything around us. When we get busy thinking in private, in the dark, elephant symbolism says we may have the most wide reaching effects.

Elephants are in contact with vibrations in other ways. They may be able to detect seismic vibrations from thunderstorms through their feet. They can detect vibrations of running animals through sensitive nerve endings in tip of their trunk when they place it on the ground.

Elephants have a similar brain structure to primates (humans, monkeys, chimps, and apes) and cetaceans (dolphins and whales) and they have advanced abilities for problem solving and tool use. Their communication is highly intricate which is another sign of complex thinking. Scientists have discovered that elephants are able to recognize their own reflection in a mirror. Self-recognition indicates a very high level of awareness only found elsewhere in cetaceans, magpies and primates.

The most distinguishing characteristic of elephants is their enormous trunk. The trunk is the nose and upper lip combined into a single appendage. The trunk is used for many, many things including breathing (70% of their breath comes through the trunk), smelling, sucking up water to deliver to the mouth, sucking and blowing dirt to cover their backs as a sun protectant, gathering food, snorkeling while swimming, communication (much like we wave our arms in gestures), sensing vibration, and manipulating tools.

The trunk is strong enough to uproot trees and refined enough to pluck a flower. The trunk in elephant symbolism teaches that with great power comes great responsibility

Besides these obvious physical differences, there is a distinct difference in disposition of the two. Asian elephants are easily domesticated and have been beasts of burden for millennia (dating back to 2000 BCE). They help with logging, farming, building and transportation. They’ve also served in the less palatable role of war machine. Asian elephants are worshipped, richly adorned and elaborately painted for ceremonies and festivals throughout Asia. This is the species we see in our circuses. Like the horse, the Asian elephant has played a key role in the advancement of our civilization and has suffered immense atrocities as a result of domestication. The bond between an elephant and a human can run very, very deep both emotionally and archetypally. Our past is linked inextricably with theirs.

African elephants are not easily domesticated, so we rarely see them in captivity aside from zoos.

When exploring the meaning of elephant in your life it is worth determining which species of elephant speaks most to you. The Asian elephant will tell of a rich and tortured past of servitude full of the paradox of intense reverence and great trial. This very similar to the plight of the horse, but different in that it is mind boggling to consider that such a giant animal would so gently and generously submit to a small human’s demands. The African elephant will demonstrate a wild nature that cannot be tamed and has been left untouched.

A Note on Land Clearing

Being the largest land animals, long living (they live to 60 or 70 years), and invested in future generations, elephants must be aware of the impact they have on the land and their ability to shape their environment. In shamanic work, elephant spirit animals are brilliant helpers with land clearings. They have the power and strength to clear away what is no longer needed, the wisdom to use restraint and the foresight to prepare the land for future generations.