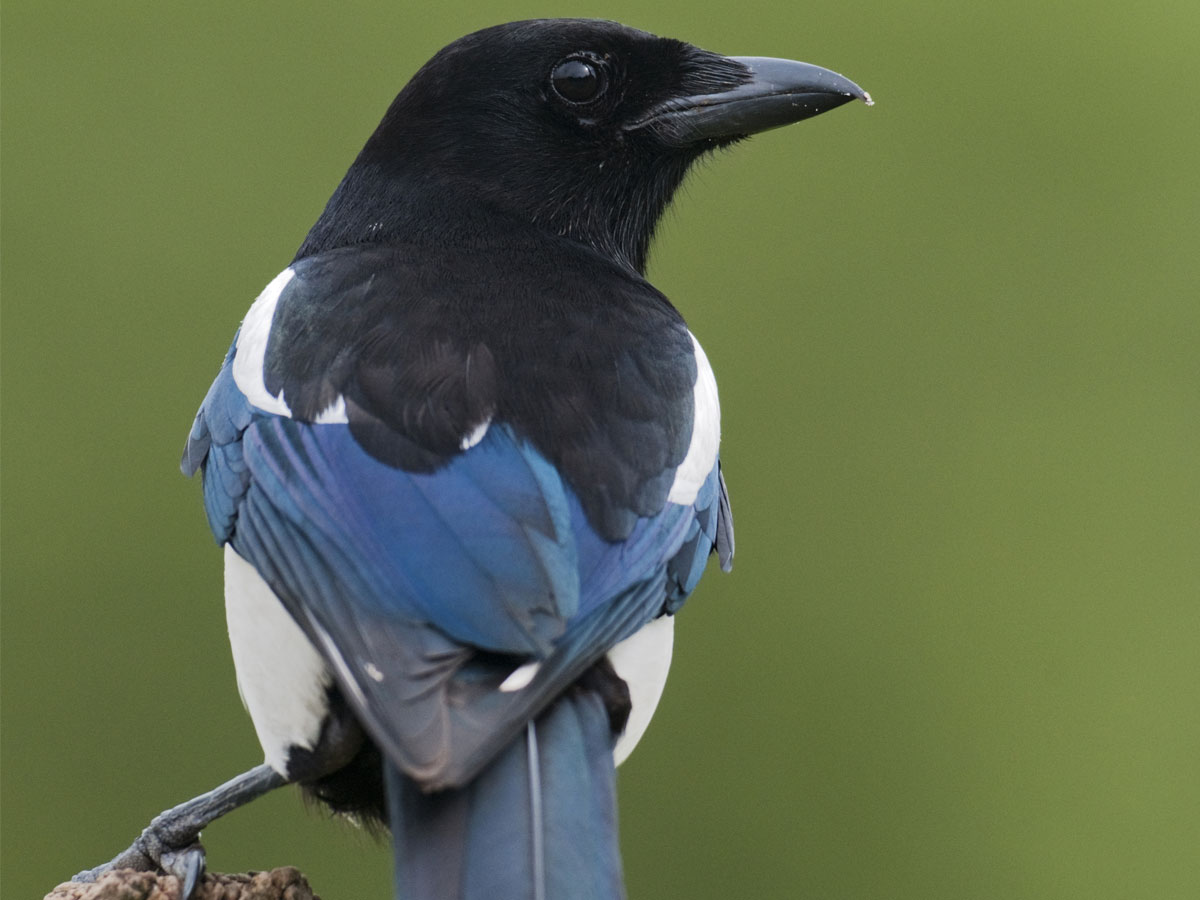 Magpie goes about her business, chattering to and fro. Both of the old world and of the new, she wears her black and white costume with her brothers and sisters going on about life as if everything were normal. Then a ray of sunshine glimmers over the tips of her wings and tail and a burst of royal blue radiates. She knows this and she is clever. She does not worry if the rain will come or go. She is the rain and lightening. She is the drought and wind. She carries on as if neither were of consequence, full of joy and mirth, warning of nothing and foreshadowing everything. She knows that she and her tribe are bigger, louder, and brighter than the others, and she knows stories about the others. She is an artist at knowing these stories.

The Rebel in Biblical Lore

Magpies are found around the world from the western half of the United States to China to England and Africa. Their association with humans goes back a long time as they followed nomadic people scavenging leftovers from hunts. There is a story from biblical lore that survives today that the magpie would not go into Noah’s Ark, but instead insisted on riding out the storm on the ridgepole of the boat, chattering the entire time. There are some references to the fact that the magpie either did not attend or refused to mourn Christ’s crucifixion. This pairs this cunning corvid with the archetype of the rebel.

Magpie spirit animal reminds you to ask: What beliefs did you adopt that now act as blocks in your quest to find your divine self?

These birds are related to crows and ravens and are a member of the jay family. They mate for life and are dedicated parents. A pair can spend up to 40 days building a large covered nest and they often are seen in small groupings of 3-5 birds as they travel about in their undulating flight looking for food. “One of the most notable Black-billed Magpie behaviors is the so-called ‘funeral’—when one magpie discovers a dead magpie, it begins calling loudly to attract other magpies. The gathering of raucously calling magpies (up to 40 birds have been observed) may last for 10 to 15 minutes before the birds disperse and fly off silently.” [1] This speaks of the ability to call on the help of your tribe in times of mourning.

When studying the meaning of magpie symbolism, it may be time to watch how you congregate with your kind and remember how others can help you with a death. This could be a death of the ego, the self, a way of life or a loved one.

Magpie Helps with a Healing

This September, I started to see two or three magpies with my horses on a regular basis. My horses would cock a back hoof so the magpies could clean the underside. The magpies would jump up and cling sideways to the horse’s legs to pick bugs from their fur. Other times the birds would be perched atop my mustangs cleaning bugs from their ears, manes, and backs.

Cherokee and Legend seemed to enjoy the attention. I was absolutely caught up in the beauty of the scene. I started working with what the birds’ appearance meant in my life and began to discover a link between their presence and my process of breaking down myths I held about other people. We all attach stories, judgements, beliefs and meaning as to why other people are who they are and what they represent in our lives, but ultimately these myths keep us from truly connecting with people. The myths stand in the way of us truly seeing them and truly being seen. I started to notice the birds every where: at work out the window, on my drives home, at my house, and with the horses.

Then, last week Legend, my white mare, feel gravely ill. A large portion of her colon had flipped 180 degrees and gotten stuck between her kidney and spleen. I went on a three day mission to save her life and the magpies were no where to be found. But, I felt their presence still haunting me and haunting Legend.

In British and Scottish folklore magpies are believed in different numbers to foretell death, a funeral, and bad luck. I learned the popular saying about magpies: “One for sorrow. Two for mirth. Three for a wedding. Four for death (or birth depending on the origin)”. [2]

As is the way of things, Chinese folklore portrays magpies of omens of good luck and sometimes I had seen the fortuitous two or three birds at a time, so I tried not to be overcome with foreboding. I waged an inner battle with my fear and superstition.

Here is when I realized that my fear of my loved one’s death was keeping me from my ability to channel healing for her. I had adopted the myth that “I can’t really channel healing that makes a difference on a physical level” because I feared what would happen if I surrendered myself fully to grace and had her die anyways. I didn’t know how I would recover from that kind of grief, but I couldn’t both protect myself from utter devastation AND surrender to divine guidance. As I broke this myth down I went through waves of intense fear, doubt, and suffering. I showed up for Legend to channel the healing power of grace in a way I never had experienced before and she survived.

On the morning of the fourth day, I checked Legend over endlessly to absolutely convince myself that she was okay. A single magpie came to her corral and landed on a fence post. As the black and white bird with a long tail looked at me with her shiny black eyes, she christened me back into the world of the living, a new world with less myths and more meaning.

Seeing one magpie is supposed to be an especially grave occasion as the popular saying goes “one for sorrow”. I knew the death and sorrow had happened in me.

I was a different person now. Legend was well and healthy. I opened the gate to let Legend out onto her pasture and life went on.

This is why I have come to think of the magpie as a mythologist. Magpie spirit animals can help us study myths we have about spirituality, the universe, others and ourselves. Magpies are known for eating anything as is indicated by their scientific name “Pica“, meaning to crave things unfit for food, and they remind us how we can crave and eat odd stories that aren’t true in an attempt to secure nourishment and safety or to feed the small fears that protect us from the big fears.

Ultimately it is not important to know why we adopted those myths in the first place, but to understand the role of myths in our lives and to treat them lightly. There’s no need to crawl inside the ark and hide away from the storm for the storm of fear and suffering is of our own making. We can light upon the ridgepole of the boat and find humor and humility in the art of rebelling against that which we thought we ought to always know.

I would like to finish by quoting a favorite song of mine by Neko Case that takes on a deeper meaning now. It’s from her album Middle Cyclone and is called Magpie to the Morning. I have to say that Legend was always the closest to death in the mornings…

You can listen to these lyrics on her website: http://nekocase.com/music/discography/middle-cyclone/