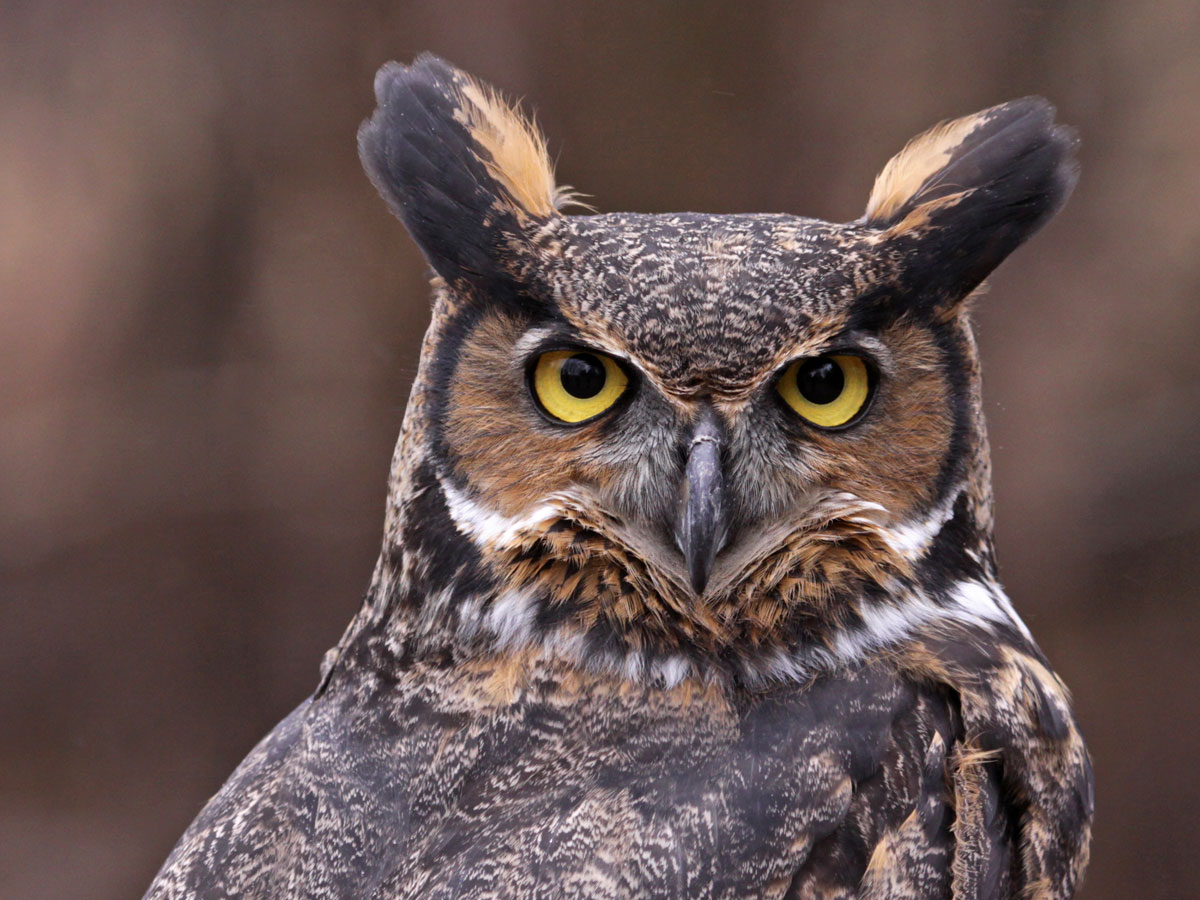 Horns and Connection with the Heavens

The great horned owl doesn’t have actual horns, but instead has a tuft of feathers on each side of the top of her head that look like horns. Horns have long been associated with the ability to connect with the heavens and access psychic abilities. In this owl’s case the horns are symbolic rather than literal, made of fluff rather than bone.

Great horned owl symbolism is about trusting that you are connected to Source even if you don’t have physical proof. With great horned owl spirit animal, don’t expect to see material world results to your wishes and prayers. The communications, the answers to your prayers, will come as a feeling or a knowing, much in the same way that wind rustles through the “horn” feathers of the owl.

Connection to the spirit realms will feel like a whisper rather than a bolt of lightening. Luckily, great horned owl meaning also encompasses the talent of all owls for acute hearing. You will find the remarkable ability to hear the faintest whisper of inspiration. The feathers of a great horned owl carry the power of the ability to connect to the quietude of the Divine. In the silence, you will find the support and solace you seek.

Like all owls, the great horned owl makes almost no sound when flying. This is due to special soft barbs on the edges of her flight feathers that gently push through the air. Hawks and falcons have stiff, sharp edges on their feathers that slice through the air and make much noise. Owls are designed for silence, both moving with stealth and hearing what others cannot.

What Big Eyes You Have

The eyes of the great horned owl are nearly as large as ours but she is less than 2 feet tall. Her eyes, when compared to her head and body size, rank among the largest eyes of all terrestrial vertebrates.

The great horned owl is the earliest of nesters in North America, laying eggs from November through March depending on the climate. Obviously, she lays eggs later in the season in colder climates such as the Rocky Mountains. This gives the great horned owl a serious advantage over competitors. She is able to hunt and raise chicks when predation pressure by other hunters is low. Her chicks are also well grown by the time migratory predators, such as hawks and eagles return on their migrations from wintering grounds.

To get such an early start, the great horned owl does not leave her home. She lives with her single mate in the same territory year round. It is significant that great horned owls are most active in the winter. We typically think of the winter, and nighttime, as the times for rest and retreat.

Great horned owl medicine brings a time of contradictions. You may be active when others are quiet, and resting when the world is active. This may result in an increased dream activity or a change in your natural rhythms. Rather than be alarmed, go with the flow. The wisdom and schedule of great horned owl will help you get ahead of the game.

Ferocity of the Warrior

The male great horned owl fiercely protects his territory not only from others of his kind, but from other raptors of his size or larger. With as much as 300 psi (pounds per square inch) crushing power in his talons, his grip equals that of the much larger golden eagle. (For reference, golden eagles are three or more times the size of great horned owls.) It takes 29 lbs of force to open the talons of a great horned owl compared to a mere 6.6 lbs. for the barn owl.

The way that red-tailed hawks and great horned owls are able to overlap in territory is that one rules the day and the other the night. Fierce fights still may break out between the two when they happen to cross each other’s paths.

The strength and courage of the great horned owl relates directly to the warrior archetype and the gift of wise action. The warrior archetype is not only known for ferocity, but loyalty. Great horned owl spiritual meaning relates to fiercely defending what you believe in as well as staying strictly loyal to where you are most at home. You’ll be able to avoid conflicts by avoiding the busyness of the tribe and retreating into the quiet and less active areas of your life.

Do not fear the medicine of great horned owl, she will not lead you into mindlessly injuring others. Instead, she will teach you about the wise use of warrior power and the amazing gifts of strength and courage. When you turn these gifts to focus on facing your own fears, you’ll reap the most reward.