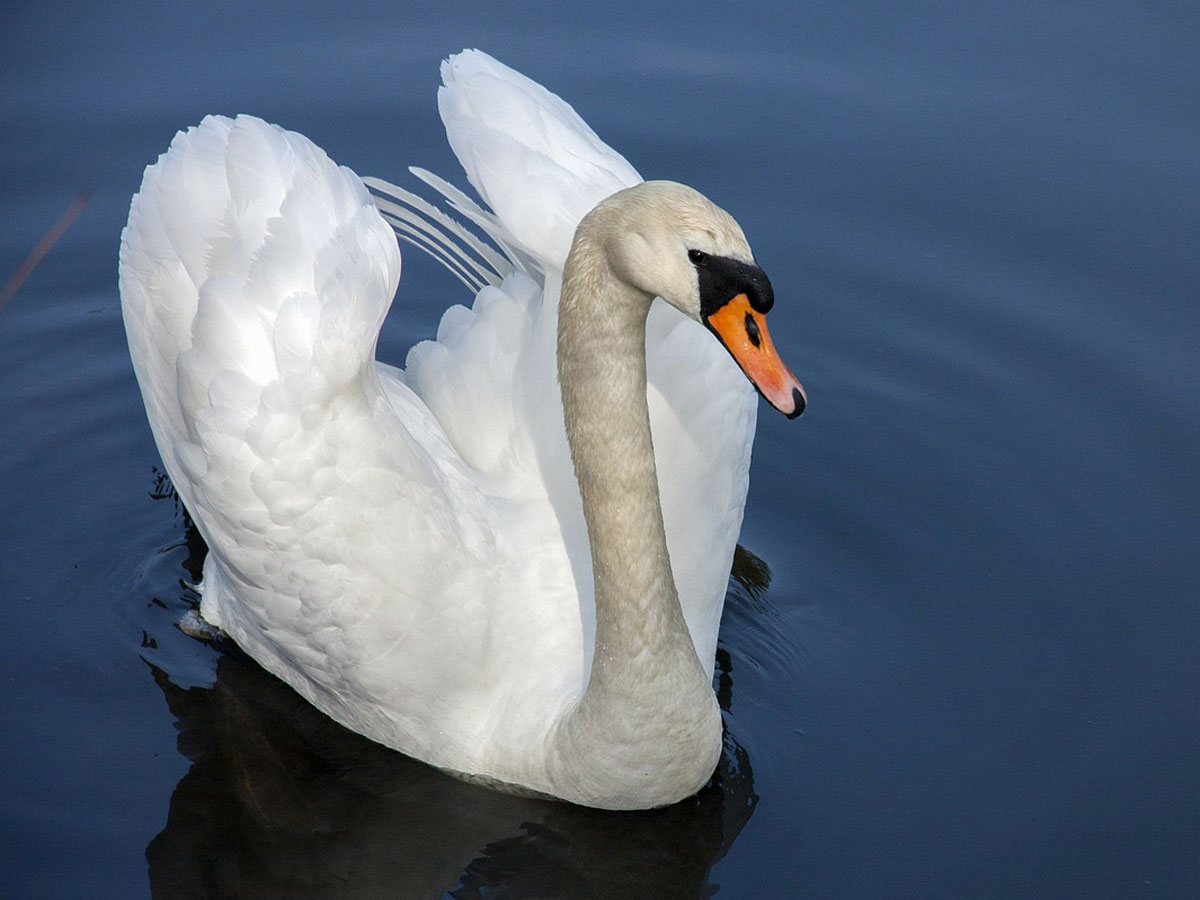 She glides gracefully along the water, neck arched with her stately head held high. Her feathers couldn’t be any more white. They gleam and look so soft and so smooth to the touch. She’s often seen in this way, gliding on the mirror-like surface of a lake, but she takes to the wing too. Her enormous wingspan reaches out as if it may touch the ends of the sky and her elegant neck stretches out, long and forward venturing into the vastness of the universe.

Swan symbolism is associated with the virtues of purity, loyalty, unity, and love.

The connection between the snow white swan and purity is obvious since the color white is synonymous with cleanliness and perfection. As we know from the story of Hans Christian Anderson’s The Ugly Duckling, swans mature into their white coats showing that even this divine beast isn’t born perfect. Those exploring swan symbolism have the opportunity to realize a purity of spirit and heart given a good dose of patience. Swans don’t reach full maturity until as late as 7 years old. A long-lived waterbird, they can live to be as old as 24.

Swan is staunchly loyal as well as fiercely protective. She mates for life and guards her mate, nest and young diligently. The long pairings and the shared care taking of the young are lovely examples of the swan’s virtue of unity.

The parents carry the young on their backs in the water to safeguard them from predatory fish. This points to a need to shelter new ideas from doubts or fears that may bubble up from under the surface of your subconscious. Her nests are sometimes built atop beaver lodges which demonstrates that the swan spirit animal is able to appreciate and prosper from the ingenuity of others. The top of the lodge is akin to the roof of a building which corresponds to higher thinking.

The swan is linked to the God Apollo who is the God of music. A “swan song” is a beautiful song swan is said to sing before she dies. She is a totem for poets and singers alike. The goddess Saraswati rode a swan down a tributary of the Ganges playing her lute while holding a rosary and book. She’s known as the goddess of music, song and poetry as well as spiritual purity. It is easy to see how swans have become a symbol of romanticism, love and devotion, but there is much more to this iconic bird.

In many cultures, Gods are known to turn into swans. The Hindu God Brahma turned to a swan to take of the challenge of flying up to find the end of the lingam of the God Shiva. He couldn’t find the top end and Vishnu couldn’t find the bottom. Both learned that they end and begin in each other.

Wohpe, otherwise known as White Buffalo Calf woman, came to earth in the form of a swan to deliver instruction on how to pray. Zeus came down and seduced Leda, wife of the king of Sparta, in the form of a swan. Their children were Castor and Pollux who make up the twins in the constellation of Gemini.

If a swan spirit animal has flown into your life, now is a good time to look for forms of the Divine disguised as gorgeous messengers.

There is a lake nestled in the Himalayan mountain range called Lake Manasarovar that sits at the base of the sacred Mount Kailish. In this lake is said to live a beautiful white swan that eats lotus fruit and nectar and who is visited by the Gods that come to bathe there. There are legends of the swan leaving the lake for various reasons. Some say she is cold and others say she is curious. She flies over the peaks to the plains and comes to land in muddy waters. Some say she finds it unsavory and returns home; others say she forgets the way back. In this way she is like man. She has come from the sacred, pure and without fault, but she falls into fault and in her muddiness she forgets her perfect nature.

This is the path of the mystic who finds herself in a state of despair once she discovers the imperfection of envy, greed, pride and malice that dwells within her. She feels unworthy of the love or even company of the Divine and forgets that she has wings with which to carry her back home.

Swan spirit animal can reassure us that despite the impure thoughts and emotions that plague our days, that ultimately we’ve come from God and we will return to him. The process may not be easy, especially given what we see in the story of the black swan. 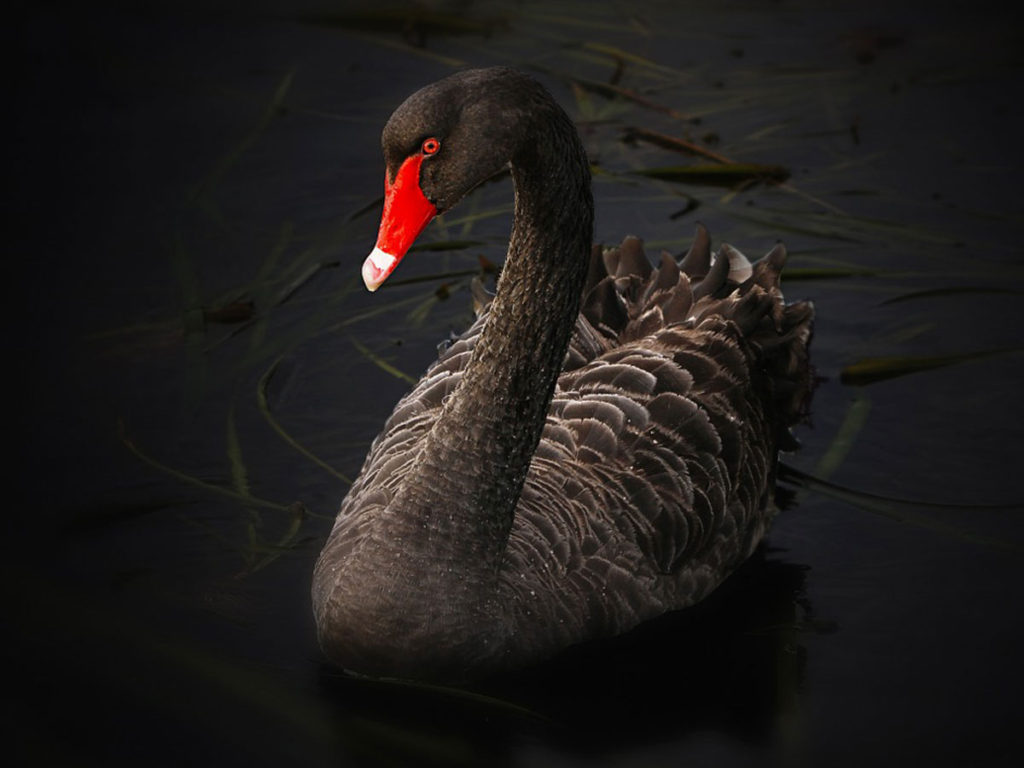 In aboriginal folklore, there is the story of a group of women who are the only people who know the secret to making boomerangs. They refuse to share the secret, so a band of men decide to steal the boomerangs from them. Two of the men turn to white swans and land on a nearby lake. The women rush to shore to view the beautiful birds and the rest of the men slip into the camp to attain the goods.

Discovering they’ve been duped, the women grow furious and chase the swans off the lake. The swans go to a neighboring lake where a pair of eagles live. The eagles attack the swans and pluck every last white feather off their body leaving them to die. A flock of crows, wanting to spite their enemies the eagles, offer their black feathers for the swan’s new coats and the swans are saved. Meanwhile, the women continue on bickering for eternity over who’s to blame for the incident. (from Oracle of the Dreamtime: Aboriginal Dreaming offers guidance for today).

This story tells us much about the journey of the spiritual seeker who looks to attain purity and perfection in the image of God. The path to enlightenment is not paved with gold, but often suffering instead. The seeker may not even start out looking for God, but for power (the boomerang). The trial she encounters turns her toward the Divine. But the meaning of swan shows that it is not the suffering that causes the transformation, rather the faith to move on from greed, thievery, resentment, blame and vengeance.

As Thomas Merton says in No Man Is An Island, “To believe in suffering is pride, but to suffer, believing in God, is humility.” All around them, the black swans are surrounded by the evil of the world and they are laid bare because of their own treachery. They are not even saved in an act of kindness, but vengeance. All around them is dark. Still they are able to accept help without judgment and to touch the Divine with the white tips of their new wings.

The constellation Cygnus (the latin word for swan) is made of the same stars as the Northern Cross. It is an interesting synchronicity that the cross, long a symbol of spiritual suffering and undying faith, is paired with the swan.

To endure suffering and imperfection with a fierce faith in the One Who Moves Through All Things turns wretchedness into a gift. Swan symbolism is about learning at the core of your being your ultimate radiance and perfection. There will likely be trials along the way to remind you of the grace and virtue of maintaining a humble soul. For even pride in your perfection renders it imperfect.

If you are currently courting swan spirit animal ask yourself the following questions: